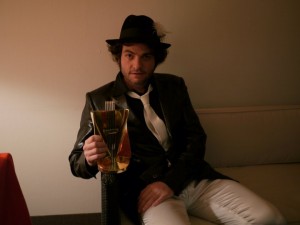 Look I don’t think we need to be feeling sorry for Johnny Depp’s now ex and baby mama anymore. I’m pretty sure she’s not sulking over Haagen Daaz and chick flicks. Rumor has it that Vanessa Paradis’ new boyfriend is singer Matthieu Chedid. Sound familiar?

Well, before you start thinking “oh geez, that was quick”, these two have made beautiful music together before (in the studio) and according to Life&Style Print Edition, Vanessa was NOT heartbroken after hearing that Johnny was straying from her because she is said to be doing the same thing! Perhaps there WAS a little hanky panky going down during their studio time.

We reported about the possible fling a few months ago and now after Depp’s official split confirmation, it seems as if these two will no longer have to hide their secret romance.

The 40-year-old French singer was spotted out with Vanessa when they were out promoting their duet together and rumors were swirling back then. A French fashion executive told Life&Style that, “There are rumors in Paris that Vanessa’s dating Matthieu. They have worked on music together over the years. And now people here are saying they’re a couple.” I wouldn’t doubt it. It just seemed to me as if the spark between Vanessa and Johnny simply fizzled. They could have just been staying together for the kids.

Check out some photos of the French singer below. There is even a picture of Vanessa and Matthieu together! So what do you think? Have these two been hittin’ it or simply just kickin’ it?

Check out their duet below.