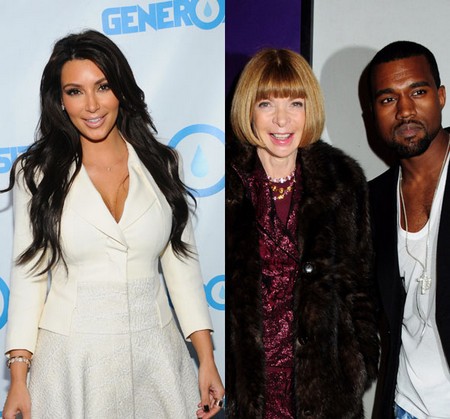 The devil didn’t want Kim Kardashian wearing Prada at Monday night’s Met Gala. Kim got mean-girled by Vogue Editor-in-Chief, Anna Wintour. Apparently Wintour doesn’t like Kim’s signature famewhoring and made sure she wasn’t on the 800 person list that included the who’s who of the fashion world darlings including, Gwyneth Paltrow, Carey Mulligan, Rihanna and Beyonce.

“Anna hates Kim,” an exclusive source told Radar Online. “Why would she be invited to the event? It is all the biggest stars in the world and Kim doesn’t fit that bill at all. The Met Gala is $25,000 a ticket, but Kim can’t even buy her way in — Anna Wintour does not want her there!”

Kim was noticeably absent. Her newest boytoy, Kanye West, flew solo to the “Fashion Oscars” causing many to question her whereabouts since the couple has been practically attached at the hip since Kim filed for divorce from New Jersey Nets star, Kris Humphries.

I have to believe Kim REALLY wanted to be there. She considers herself a player in the fashion world and even has a pretty successful Sears line with her sisters. She’s all about events like this and walking up those stairs catapults you into an elite category – one she’s desperate to be a part of. And celebrity couples get double the exposure. Jay-Z and Beyonce, Tom Brady and Gisele Bundchen, and Justin Timberlake and Jessica Biel are just a few examples of couples who have benefited from it in the past.

Kim tweets pictures of her half-naked body on a daily basis – there’s no way she’d pass on that kind of attention without a fight. But Wintour wasn’t having it. She’s skinny but she’s scrappy and one cold stare from her could stop men in their tracks. Have you seen The September Issue? I knew Wintour couldn’t climb out of my television but I still thought she was scarier than that girl in the Ring.

Or maybe it’s more than that. As reported on CDL, there were rumors that Beyonce didn’t want Kanye bringing Kim around her and her A-list friends. Beyonce and Wintour are tight enough for Wintour to grant Beyonce the cover of Vogue. Could Wintour have had multiple people in her ear telling her to keep the newly gluten-free reality star out? I’m not sure. I like to think Beyonce’s a little too busy at the moment to mean-girl but who knows with this crew. Even Kate Bosworth just revealed these fashion shows are more like high school than we think. If that’s the case, is Wintour the Queen Bee or was she just the messenger?