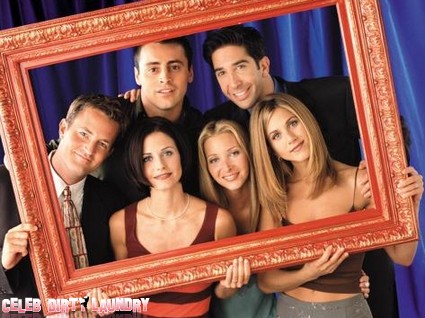 If you’re waiting to see Ross, Rachel, Monica, Chandler, Phoebe and Joey on the big screen…I have some disappointing news. Jennifer Aniston will not be taking part. She reckons a Friends movie won’t work.

Jen – who played Rachel Green on the long running sitcom  – has told The Hollywood Reporter she can’t the see the point in making a film  “I can’t imagine how you would do it, unless you did it years from now. Then it would be: ‘Who are these guys? What are we watching? Friends is in your living room; Friends is not in a movie theater. It doesn’t make sense to me. I think it would be going against its authentic self.’

She’s not bad-mouthing the show that made her a household name …she just doesn’t want to cheapen it’s success with a half hearted comeback  ‘I loved what I did for 10 years; it was pure joy and nothing but fun, and it’d be hard to top it‘.

But could the real reason be Jen is the only cast member to forge a successful career in the movies post Central Perk? She’s managed to shake off Rachel Green and that infamous haircut and become an A-list movie star. While she’s promoting her new release Wanderlust – which Celeb Dirty Laundry covered here Jennifer Aniston Talks Up Wanderlust – her former co stars are still on the small screen. Courteney Cox is starring in Cougar Town, Matt LeBlanc on Episodes and Lisa Kudrow on Web Therapy. Matthew Perry and David Schwimmer have also been unable to top the success they had on Friends in later years.

Whatever happens we can’t have a Friends movie without one of the gang of six. So as long as Jen says no – it ain’t happening.