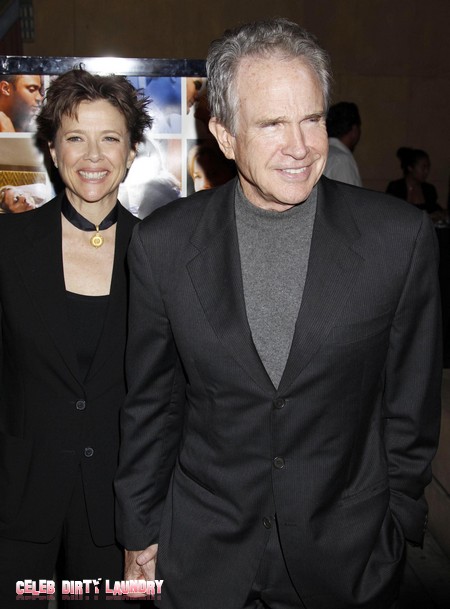 Warren Beatty says ‘no penis for you’ to his transgender son, Stephen Ira.  Warren and his wife, Annette Bening, are more than willing to pay for school and living expenses for their child but they won’t pay for a sex-change operation.  Their 20-year-old son, Stephen Ira, was born as a daughter who was named, Kathlyn.  Apparently Warren just does not accept the concept of gender re-assignment and he is not going to pay for it.

National Enquirer reports:  WARREN BEATTY says he’ll spare no expense on his son’s education – but he refuses to spend a single cent on gender reassignment surgery.

Warren and his wife Annette Bening have told their 20-year-old son Stephen Ira – born Kathlyn – that they’ll even pay the living expenses and tuition bill for an advanced degree, but that’s where the free ride stops!

“Warren is ada­mant about not shelling out any of his hard-earned mon­ey for Stephen’s sex-change operation,” a family friend told The ENQUIRER.  “The whole concept of gender-bending is very difficult for Warren to accept. While he’s finally come to terms with his little girl living life as a man, he can’t fathom the thought of paying for the actual procedure.”

“Warren and Annette both agreed they’ll pay for Stephen’s schooling. He’s basically on his own after that.”

RELATED: Warren Beatty Does Not Want His Daughter To Have A Sex Change

Stephen, an outspoken activist for the transgender community, attends pres­tigious Sarah Lawrence College in New York. He regularly uses Twitter and recently revealed he had to take odd jobs.

“Stephen is very intelligent and extremely independent,” said the family friend.  “This is his journey, and he doesn’t expect his parents to pay for his surgery.  “Warren and Annette have had to deal with a lot, but they realize it’s been even harder for Stephen. They may not be paying for his sex change, but they totally support their son.”

Should Warren stop being so judgmental and pay for Stephen’s sex change operation?  What do you think?  Let us know in the comments below.