Washed Up Metallica Struggles To Find Something New 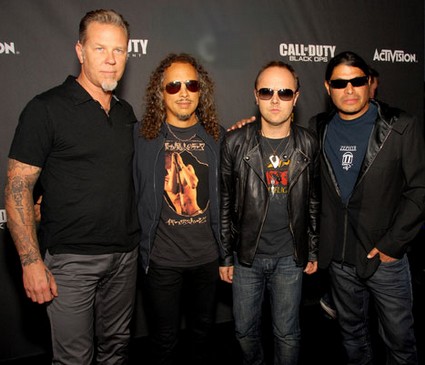 Metallica should have packed it in years ago – they never were too good and now they are just tired. Since they have nothing musically to contribute, the are thinking of “wacky” ways to release new music. The band is without a record contract which should tell you just how sad they are. I mean even Rebecca Black has a record contract!

RELATED: Rebecca Black Gets Bullied Out Of School

The ‘Enter Sandman’ hitmakers’ record deal with Warner expired following the release of 2008’s ‘Death Magnetic’, but they have been recording new songs and are currently exploring different ways of getting the tracks to their fans.

Drummer Lars Ulrich told Spin: “We’re free and clear of our record contract. The world’s our oyster. We can basically do whatever we want. And we’re going so start figuring that out.”

“We’re writing music and we’re going to be recording very soon. At some point we’re going to want to share that with people that are interested in listening to it. So we gotta figure out ways we want to do that, from giving it away in cereal boxes to getting people to do handstands for it. We could come up with something wacky.”

However, Lars insisted the band won’t utilize unusual strategies just to be “cool” as they want to make sure their worldwide audience can still get their music.

He added: “This whole thing about who can come up with the coolest [release strategy] so it can be written about on 12 different blogs for six hours – I mean sure, that’s all pretty cool and hip.

“But at the same time you have to remember we have a very global audience. We have fans in India and the U.A.E. and Russia. In a lot of these places there are still more conventional ways of getting music to people.”

Face the facts – Metallica are just too old to rock and roll.