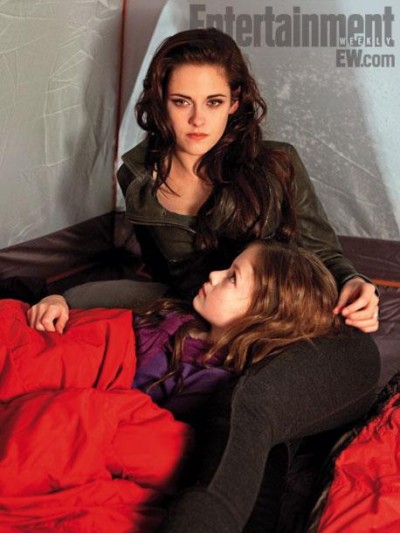 A ten-second sneak peak for the hugely anticipated film, The Twilight Saga: Breaking Dawn Part 2, has been released. Check it out below!

There’s a little more plot development in the short clip. We hear Edward refer to Renesmee as an “immortal child”! And we sense upcoming problems with the annoying Volturi.

Lionsgate and Summit Entertainment gifted this little teaser on the official website to drum up excitement for the official trailer which will follow tomorrow. Be sure to check back here. We’ll have it for you!

It will be a special present for all you Twihards out there even though it’s really Edward Cullen’s birthday. Yep, the studios are celebrating the big 1 1 1 for Edward and giving us another glimpse of the film. The studios released the first trailer last March and didn’t divulge more than a couple running and fondling shots. Hopefully tomorrow’s gives us a little more to go on.

Breaking Dawn Part 2 is the last film in the Twilight Saga series that made Kristen Stewart and Robert Pattinson international superstars and household names. It will clear up so many loose ends! How will Bella react to being a vampire? Does halfsie baby Renesmee eat everything in her path like a vampiric Chucky doll? What happens between the Cullens and the Volturi? Most of us already know those answers but we have to know how the movie depicts the juiciest parts! How will they handle the Jacob imprinting scenes without making me want to throw up? I’m sorry but that’s one part of the book I gagged at and still do. I can’t get down with that plot twist.

The movie comes out November 16 but be sure catch the trailer here tomorrow. What are your thoughts of the sneak peak? Do you think the movie will live up to the massive expectations?