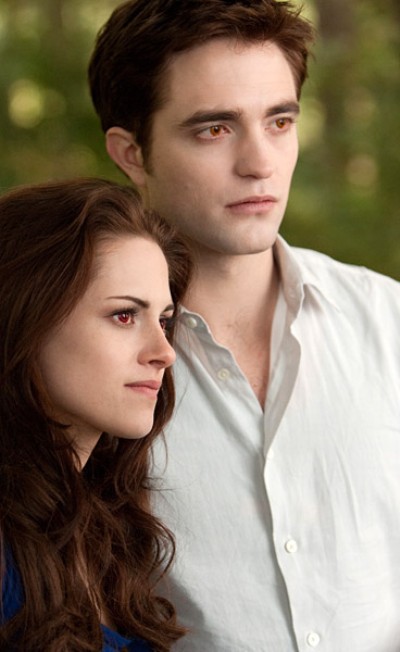 The Twilight Saga: Breaking Dawn Part 2 trailer has finally been released! Check it out below!

It’s much better than the first trailer released back in March. It gives us a lot more to go on! Just like the 10-second teaser trailer hinted yesterday, Edward and Bella are adjusting to their new life with their fast-growing “immortal child” Renesmee, but have to recruit some vampire friends to help fend off an attack by those nagging Volturi who are after the half vampire/half human baby.

What do you think of Kristen Stewart in the clip? I’m mixed. Her eyes are freaking me out. I’m not feeling them, but I think that’s because she’s absolutely gorgeous with the brown contacts she wears in the films. Other than that, there’s a major shift in Kristen’s persona on screen. She’s oozing with sexuality and confidence and you can even see her charge in the attack against the Volturi. It’s going to be a hard sell to convince me that Kristen Stewart and Robert Pattinson can play parents though, but the last scene of Bella  and Renesmee on the bed was spine-tingling cool. Bella tells Renesmee, “I’ll never let anybody hurt you” and it ends. AHH! How will we be able to wait four more months! Hopefully they release more trailers!

Are you happy so far with the movie’s depiction of Bella as a vampire? What do you think of the clip? Is it everything you need to get you through to November 16?