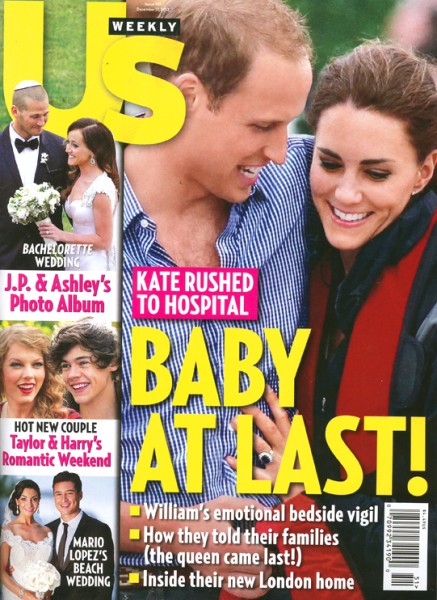 I still think this is all Weight Watchers’ fault. It should have known better. Jessica Simpson as a advocate for weight loss? It wasn’t its most brilliant marketing plan and unfortunately it keeps biting them in the ass. According to Us Weekly’s cover this week Jessica Simpson’s new baby has screwed things up so badly the weight loss giant is considering pitching Jessica’s second ad showing off her “70-pound” (?) shrinking.

“They’re furious with Jessica,” a source told Us Weekly. “She was already on thin ice with them since she didn’t lose enough [weight] for the first ad, when they had to shoot her from the waist up. They don’t think it [the second ad] can run. No one wants to hear about a pregnant woman dieting.”

No, that’s probably wise. All the judgey moms will FREAK out if Jessica deprives her fetus of buttered pop tarts on the next go around. But screw the ad. Jessica could care less about the ad. But she likes her money and the source says she might miss out on some of that $4 million paycheck. They shouldn’t pay her! She didn’t live up to her end of the bargain. She claims she lost 70 pounds and I think it’s evident to all she hasn’t (or she just got some surgery done) AND there were even stories that she didn’t follow the diet at all but had her private chef make special smoothie meals for her. Do all spokespeople do that? Probably, but Jessica has done her damnedest to screw this whole thing up and make Weight Watchers look stupid as all hell. Shame on them, sure, but I’d bet there’s a lawsuit there that could happen if she demanded every penny of that $4 million.

Kate Middleton and Prince William are naturally the stars of Us Weekly’s cover since Kate announced her pregnancy this year. Do you think she’ll be eating buttered pop tarts? And we have more Taylor Swift and Harry Styles love news. Can we put a bet on that Haylor will be over by the New Year? That’s Grinchy as all hell but she really needs to start dating men her own age! I’m all Team Hailie Mathers on this one!

So can you blame Weight Watchers? Jessica Simpson hasn’t been a model celebrity endorser has she? Should she have been more careful about getting pregnant since she was under contract or is stupid is as stupid does?