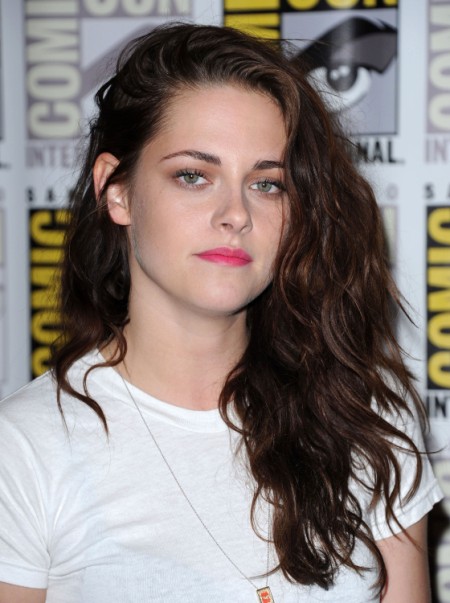 It’s what we’ve all be waiting for – an interview with Kristen Stewart after affair! And it turns out the camera shy actress isn’t going to disappoint. She’s not just walking the red carpet for On the Road at the Toronto Film Festival, she’s going to give interviews and we already know of one for sure. Kristen will sit down with MTV’s Movie Night correspondent Josh Horowitz to talk film – and only film.

Canada Newswire reports: “MOVIE NIGHT catches up with Ryan Gosling to discuss his upcoming drama A Place Beyond the Pines and hangs with Snoop Dogg to chat about the premiere of his documentary Reincarnated. From Kristen Stewart to Rob Zombie, Andy Samberg to Colin Farrell, MOVIE NIGHT has the Festival covered. An original production, MOVIE NIGHT airs Thursdays at 6:30 p.m. ET.“

This is a good choice for Kristen. She’s worked with Horowitz before to great reviews. He managed to get her to read from Fifty Shades of Grey when she was doing publicity for Snow White and the Huntsman. It was pretty awesome. Horowitz isn’t going to ask anything too serious and certainly won’t bring up her private life. That’s got to be off limits, and if an ambitious reporter does bring the Rupert Sanders episode up, I’d imagine she’d steer the conversation back to her movie. Most likely her people have worked with her on that possible situation. Kristen’s not known for being good on the fly so hopefully she was practicing this past month in between her alleged crying fits, red bull runs and cigarette breaks.

I haven’t heard about any blockade against bringing Robert Pattinson up so she might get some uncomfortable questions. However, if her PR people are worth a damn (which is questionable), they’d put the kibosh on that idea before she even sits down to talk. She’s already issued a statement. That should be enough from her end. I doubt she’d show her face at TIFF if she even thought reporters would bring up her scandal. Now that’s not to say she won’t hear about it. There will be hecklers, whispers and stares but the fact that she’s finally showing her face has got to get her some points. I’m going to keep my eye of Tom Sturridge. Pre-scandal, Kristen and Rob’s best friend were all over each other at Cannes when the walked the carpet together. I want to see how close he gets to her here. It would be a major help if he showed her some compassion and be an indication of where Rob’s head is as well. If Tom freezes her out the entire time, we can deduce Rob is still not in a forgiving mood.

How do you think Kristen will handle the questions? Will Robert Pattinson be allowed to come up?