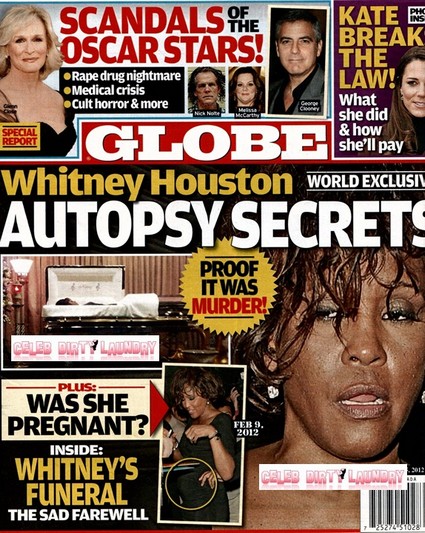 The March 5th, 2012 issue of Globe Magazine features the cover story ‘Whitney Houston – Autopsy Secrets.’  The magazine claims that they have proof that Whitney Houston was murdered.  They also speculate on whether she was pregnant at the time of her death.  The magazine includes pictures of Whitney where they claim she is sporting a baby bump.   This is certainly a ‘no holds barred’ week for the tabloids.  First the National Enquirer published a photo of Whitney in her coffin and now these claims by Globe.

Globe has the scoop: Whitney Houston’s autopsy will reveal explosive secrets about the star including proof she was murdered –and a blockbuster pregnancy shocker.  Globe reveals that Whitney was found dead in the bathtub in her Beverley Hilton hotel room on Feb 11 was hiding a baby secret.  Several people in Whitney’s entourage believe she was pregnant when she died, an insider tells Globe.  Whitney thought she might be expecting although she said it would be a miracle.

There is also chilling proof that Whitneys death was murder.  One of the singer’s aides found her face-down in the water with her legs and arm dangling out fo the tub..  Whitney’s odd position in the tub argues again a drowsing death.

Whitney was broke, but owed drug dealers a staggering 1.5 million, and her death smacks of a hit man revenge to show other junkies what would happen if they failed to pay.  You don’t get away with owing that much money to vicious drug dealers and live to tell the tale, a law enforcement source told Globe.

One thing we know for certain, the autopsy results were initially listed as ‘deferred’ and Assistant chief coroner Ed Winter told reporters that police had requested that no details about Whitney’s autopsy be publicly released.   He did say the coroner’s officials were not ruling out any potential causes of death. He said there were no signs of trauma on Whitney’s body.  He said toxicology results would take weeks and the results were needed to determine how Whitney died in a room at the Beverly Hilton Hotel on Saturday afternoon.

So there you have the story – is this all groundless speculation by Globe to sell more magazines, probably…  What do you think?  Sound out in the comments below!