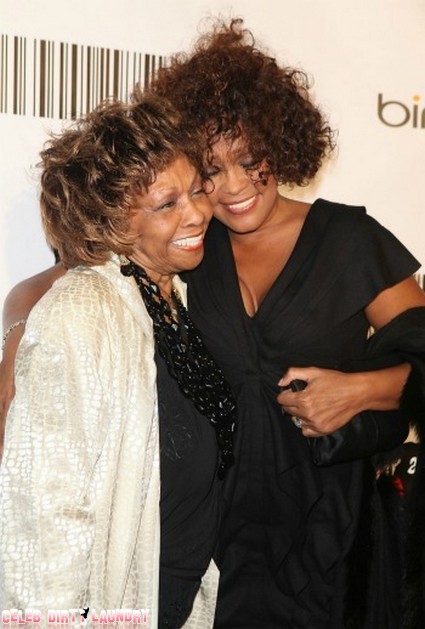 The final autopsy report into Whitney Houston‘s death was not a shock to any of us. The fact drugs played a major role was inevitable given her decades of abuse. But her Mom Cissy Houston is devastated by the findings and is asking the World to remember her daughter as a great talent and loving mother – not a ‘druggie‘. It’s a tough ask given her very public spiral into the depths of crack cocaine addiction.

According to TMZ…Cissy was hysterical when she heard about the Coroner’s findings. She was truly shocked to learn about the white powder, drug spoon and paraphernalia found in the hotel room where the diva died almost two months ago. Celeb Dirty Laundry covered the findings here Whitney Houston’s Final Autopsy Report

Cissy wants Whitney’s great musical performances to be her legacy – not her lengthy addiction which ruined her voice and career and ultimately killed her before the age of 50. She reckons the singer’s greatest performance may have been at the Super Bowl in 1991 ‘This is the type of thing people should remember Whitney for‘. But she admits ‘No one’s perfect. Only the Lord can judge.’

I’m afraid Whit will be remembered more for her bad performances than her good ones. Footage of her trainwreck of a tour Down Under a couple of years back shows a former star battling to hit the high notes she once effortlessly reached on stage. She was sweating profusely and stopping for a drink during songs. That’s the lasting memory for some. Then there’s her infamous interview with Diane Sawyer in 2002 when she famously said ‘crack is whack‘. It’s hard to look past those incidents when it comes to remembering Whitney.