Who Will Be Voted Off THE VOICE Semifinals Tonight? (POLL & REVIEW) 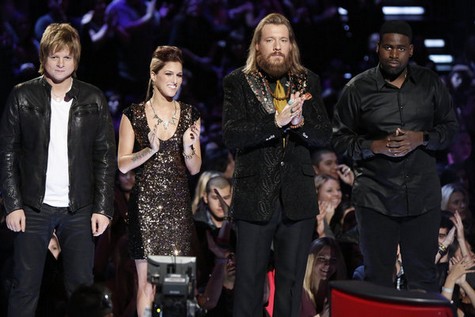 Only four singers remain on NBC’s super popular reality television talent show, The Voice – Trevin Hunte, Terry McDermott, Cassadee Pope, and Nicholas David. These four performed last night during the live semi-finals of one of the most heated finale races in the history of the short series, and Celeb Dirty Laundry, as always, is here to be your most trusted guide on all things The Voice. So, without further adieu, take a look below to see how we rated your favorites!

Trevin Hunte – Team Cee Lo – Wind Beneath My Wings – Trevin’s velvet voice and sugary vocals draped itself over the pitch perfect tone of this rendition. His fan base exploded after this version of the seminal Bette Midler hit, and Trevin demolished his competition. Although the performance was overly dramatic and cheesy, Trevin was still able to handle the depth of the emotion and the lyrical beauty. If Trevin is able to further connect with the audience, he might win it all. OUR SCORE – 9 out of 10.

Nicholas David – Team Cee Lo – You Are So Beautiful – There’s no denying that Nicholas is one of the most original contestants in the history of this series. Fortunately, Nicholas has, throughout his run on this season, been able to deliver unorthodox and unique performances every single week. His Joe Cocker rendition of this extraordinary song was one of impeccable perfection and vocal ability. There is a subtle beauty to Nicholas’ voice that is unparalleled by any of the other contestants. This is what a true music artist should sound like, so listen up kids! OUR SCORE – 10 out of 10.

Cassadee Pope – Team Blake – Stupid Boy – Cassadee’s performance last night was absolutely genius. She played to her strengths and her fan bloc with her exceptional (and surprising) vocal performance. She missed out on a few notes during the opening of the song, but quickly picked up and steamed ahead with her performance. Her chorus gave us cold chills. This girl might win it all if she focuses on the correct song choices and blows up the audience during the finale. OUR SCORE – 8 out of 10

Terry McDermott – Team Blake – Let It Be – It is seldom that a singer is able to do this Beatles classic and bring us to tears. Terry did justice to one of the greatest songs ever written, and ripped out our emotions with his power vocals and open soul. We were waving our faces with our hands to stop the tears from running – proof that Terry should win this entire competition.  He is, by far, one of the best contestants in the history of this show. OUR SCORE – 10 out of 10

What do you think? Who do you think SHOULD leave the competition tonight? Why don’t you let us know in the comments below and vote in the official Celeb Dirty Laundry poll? Remember, we tune in so you don’t have to tune out!