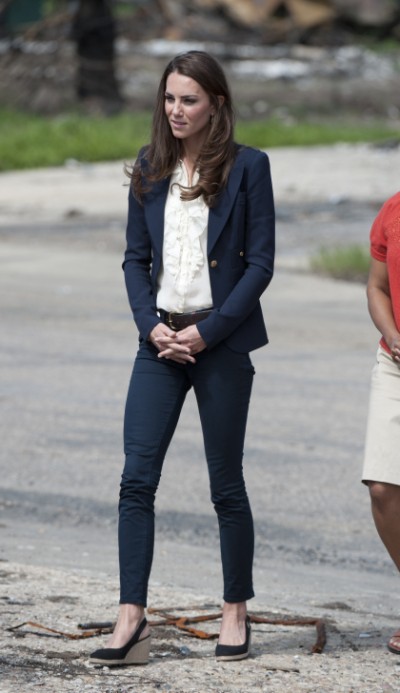 Weight issues have plagued Kate Middleton’s perfect image for years but they’ve been pretty quiet of late – not because she looks any fuller (because she DOESN’T) but because the press has taken a likin’ to its princess and is hesitant to p-ss off the royal family. If the British press starts in on Kate Middleton’s weight, then it’ll have to deal with crotchity Prince William and no one wants that. But that didn’t stop Katie Couric from voicing her opinion!

The Daily Mail wrote: “Katie Couric has launched an extraordinary attack on Kate Middleton and claimed that she is ‘getting too thin’. The TV show host said that the Duchess of Cambridge needed to put on some weight – or she might not have her as a guest on her new programme. Couric also renewed her attack on her former employers at CBS and said she should have been ‘more circumspect’ about working with the company.

“Her comments about the Duchess are likely to cause outrage at Buckingham Palace which granted her extensive access to the Royal family during a recent special for ABC News, where is a special correspondent. She made them during the filming of the first episode of her new chat show Katie in response to audience questions about who her dream guest would be.

“Couric said that Kate would be her choice but there was one issue: ‘I think she’s getting too thin.’”

Christ! Now the palace is freaking out again! Apparently they think Couric is biting the hand that fed her since she got the exclusive interview with Prince William and met the Queen during her Diamond Jubilee piece earlier this summer. Look, I love me some Kate Middleton but Couric called a spade a spade. B-tch is skinny. Kate and the palace don’t want people fixated on her weight. I get that, especially with Princess Diana’s past problems, but doesn’t it seem like Kate is fixated on her weight? And don’t give me the “Kate shows pride in her body and takes care of herself” nonsense. She’s CRAZY about her weight. You don’t get down to that size on her frame without being a little obsessive. Am I saying she’s going to unhealthy extremes to stay that weight? No. I’m saying, to be that size, one has to really make it a major priority in one’s life and it’s easily noticed by an outside observer.

Should Couric get her hand slapped for her slip up? No. She made a comment. It was probably offhand and she’s a TV personality. It’s her right. And I’m getting kind of sick of everyone tiptoeing around the anorexic elephant in the room. Kate Middleton’s a public figure. Her people need to get a thicker skin. If she’s going to cry every time someone points out she doesn’t eat then maybe she should try eating. If she doesn’t think she’s skinny then there’s something wrong with her head. But she obviously likes the way she looks with those extra 10 pounds off so she and her people should just acknowledge that this is the way it’s going to be and ignore the comments. Why address them at all? It is what it is. They know people are going to talk so get over it.

Kate and William are control freaks. They can’t stand negative attention which is why they just hired a new press secretary. The Telegraph reported they stole former BBC producer, Ed Perkins, from the Queen. A NETWORK PRODUCER! That’s telling, no? Kate and Wills know they’re a product and they are savvy… very savvy.

Do you think the palace is overreacting over Katie Couric’s Kate Middleton comments or are Kate and William allowed to be annoyed that the press keep harping on Kate’s eating habits? Do you think the public’s opinions on Kate’s weight have a little bit to do with her own fixation?