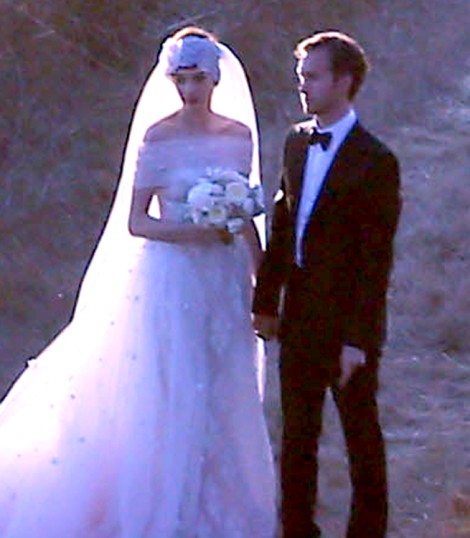 Anne Hathaway got married this weekend. Awesome. Good for her. She looked gorgeous. New info is trickling in about the relatively secret event. Celebuzz described it as rustic and vintage with about 100 guests. Like Natalie Portman’s recent wedding, the “I Dos” took place against the rugged Big Sur coastline. But that wasn’t all the two actresses shared on their big days. Apparently, Anne also hired Natalie’s wedding planner and florist. Not a big deal, right? These women are a part of a very exclusive set and the elite pool from which they pick and choose is probably very small. But I couldn’t help but wonder if Anne had some ulterior motives. Just like Natalie last year, Anne’s a shoe-in for an Oscar nomination. Did she also steal Natalie’s Oscar game plan along with the wedding planner?

Let’s rewind. Last year Natalie stole the show with her performance in Black Swan and her growing baby bump during awards season. For some reason, everyone likes a pregnant woman and Natalie’s people seemed to be all over that fact. The ultra private actress had no problem gushing about her womb every other second. You probably haven’t forgotten the TMI Golden Globe speech heard round the world when Natalie joked about her fiance and said, “Benjamin choreographed the film, and also you might remember him in the movie as the guy when they ask, ‘Would you sleep with that girl?’ And he’s like, ‘Pffsh, no.’ He’s the best actor. It’s not true: He totally wants to sleep with me!” Who does that? Girls who want Oscars do that. Trust.

Because although it is a talent competition, it’s also a popularity one and Anne is gathering steam. Not only did she have a summer blockbuster with The Dark Knight Rises but now she’s going into the Oscar race with a new husband and an amazing performance as Fantine in Les Miserables. Did Anne purposely get married to help her chances? Maybe. Did she need to? Maybe. I don’t know. The movie’s already getting crazy buzz and she did cut off all her hair and lose tons of weight. The academy likes physical changes (see also: Tom Hanks and Charlize Theron) and it also likes team players. And Anne is nothing if not a team player. She took one for the team when she hosted the Oscars with James Franco and then graciously let him sh-t on her every day after. She also sang alongside Hugh Jackman when he hosted a couple years ago. People love Anne Hathaway. She tries but not in a smug way. She’s just a theater geek and it actually comes across as endearing.

So, we could totally NOT be cynical b-tches and think Anne just wanted to get married. That’s a nice story. It’s a huge year for her and she just wanted to make it more special. Also, it gives her some new material to talk about while she walks all those red carpets. But… if there’s a baby I will not be so giving. There have already been baby rumors. If she ruins her red carpet dress season with a baby bump like Portman did last year then I’ll know it was for the Oscar. Anne loves her fashion and she rarely misses. I can’t imagine she’d let that lumpy accessory in the way of sartorial perfection. Can you?