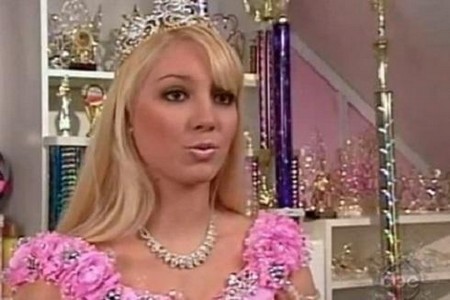 Seems like the stripper pole isn’t the only one Alicia Guastaferro’s been working lately. The 20 year old – featured as a teen on ABC’s Wife Swap as the “beauty queen from hell” – was popped for prostitution, possession of a controlled substance and lying to cops back in August.

Arrested with her was attorney James Doyle – a 54-year old “friend” of the family – who allegedly paid the Wife Swap brat for sex twice monthly. He was hit with charges of driving drunk, soliciting a prostitute and providing alcohol to a minor.

The pair was nabbed at a rest stop “slumped over” in his running car. He claims they were napping.  Doyle has said there was “absolutely nothing of a sexual nature with respect to our encounter, whatsoever, at all.” If that’s true, he certainly wasn’t getting his money’s worth out of the spray tan vixen.

Although Alicia admitted to the arresting officers that Doyle paid her $500-$700 for sex each time they hooked up, she plans to plead “not guilty” to prostitution charges in her trial that starts this week. Perhaps inhaling spray tan fumes have dimmed her understanding that telling cops you were boning for money is the very definition of prostitution.

Since her family appeared on Wife Swap back in 2008, all three of the Guastaferros have been arrested. Dad Ralph Guastaferro is serving time in the federal pen for money laundering, Mom Karen Guastaferro is on probation for paying people off the books in their Buffalo, NY window tinting business and now Alicia has made them a family trifecta of bad judgment.

The family drew criticism for their appearance on Wife Swap – her Dad was shown spray tanning her (inappropriate), both parents were shown doing her homework for her (insipid) and they left her daily presents under their year-round Christmas tree (ill-advised).

Highlights from the show included Alicia ripping on lesser mortals saying, “I do feel sorry for people that are not gorgeous people.” In the years following the Guastaferro’s appearance on the ABC show, Alicia sued the network for $100 million saying the antics shown were set-up by show honchos and she’d endured intense bullying and had to seek psychiatric treatment as a result.

ABC settled out of court with the Guastaferros for an undisclosed amount. Since then, Alicia has grown progressively more spray tanned and has gone to work as a stripper. It seems incongruous that those paragons of parenthood didn’t teach her the life skills she needed to make something of herself… College was probably out of the question as well – the homework would have been too much of a challenge for her folks.

The former pageant winner/reality show brat got married last year – to Scott Klaveno – a strip club manager who’s since dumped her and moved across the country to get away from her. When contacted in Florida about the charges against his estranged wife, Klaveno said, “The prostitution arrest is no surprise to me.”

Although many news sources have made much of Guastaferro’s “hot” mug shot, she looks more like Annoying Orange than a beauty queen these days. As a final thought, I wonder if she’s paying the attorney who’s representing her in court or if he’s paying her???