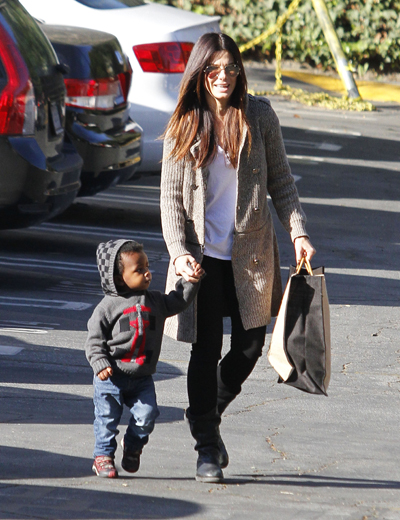 Sandra Bullock is still walking around with a broken heart and she is praying that another adoption will ease her pain.  Sandra hopes that adopting a little sister for her son Louis will save her from her crushing misery and loneliness.

Sandra is taking what seems to be a very long time to get over the heartbreaking blow delivered by her ex-husband, Jesse James.  Despite receiving intense and ongoing psychotherapy Sandra can’t seem to learn how to love again.

Sandra suffered the ultimate heartbreak and humiliation after winning her Academy award in 2010 when she and the rest of the world discovered that Jesse had been cheating on her extensively for years. The couple married in 2005. Their divorce was finalized in 2010.

A source says: “Sandy’s whole world fell apart when Jesse’s cheating scandal exploded and the only thing that kept her going was the arrival of her adopted son, Louis.”

“Sandy’s still shattered from the public kick in the head her bitter divorce with Jesse became. She loved him with all her heart, and his betrayal cause massive emotional destruction.”

Since Jesse, Sandra has been linked with Keanu Reeves and Ryan Reynolds but nothing has come of these liaisons.

SEE: Another Risky Romance For Sandra Bullock With A Bad Boy

The pal continues: “But regardless of her love life, Sandy still wants another baby. She’d love to adopt a little sister for Louis. That’s probably a bigger priority and could very well happen before she finds her ‘Mr. Perfect.’”

“Sandra has been seeing a therapist three times a week for almost 2 years” a family friend told the Enquirer.

The residual damage resulted in Sandy “putting up a steel wall around her heart” when it comes to romantic involvements, the source said.” And she’s been working hard to break through with the help of a therapist.”

“Sandy’s so guarded when it comes to love that she hasn’t really been able to allow herself the freedom to enjoy a romance,” said a friend.

The actress” wants to find love again, but fears she cannot trust herself to make the right choices,” the friend added.

“She jokingly calls her therapist her ‘Love Doctor,’” because they’re working on issues that have impeded her moving on and finally bonding with another guy.

“Sandy wants a daddy for Louis, and she also wants to find her ‘Mr. Right’. She says she’s making progress and working past the pain.  And she’s hoping in time she can find love again”

But Sandra is still licking her wounds. “She’s longing for a man who will cherish her and provide a ‘happily ever after’ ending to her terrible love ordeal,” said the friend.

Will Sandra’s wounds ever heal?  Has Jesse merely damaged her heart or has the brute actually destroyed it?  Is another adoption the answer to Sandra’s emotional problems?  Is it unhealthy for Sandra to attempt to replace a man in her life whom she can love with the adoption of another child?  How healthy can it be for the child?   Let us know in the comments below.