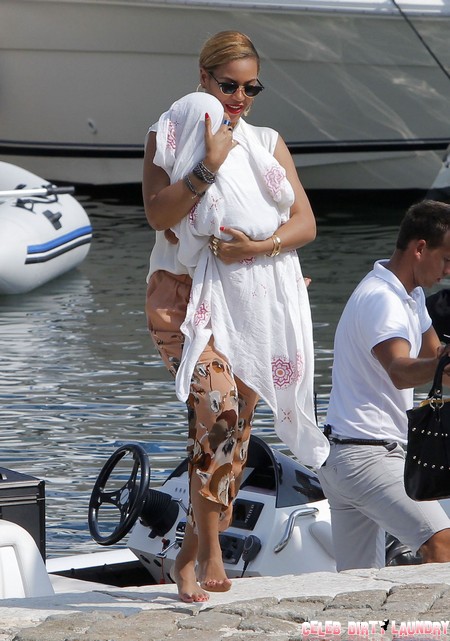 Joining the ranks of acts like Madonna, Michael Jackson, Ella Fitzgerald, Chubby Checker, New Kids on the Block, Diana Ross, and the often forgotten Janet Jackson and Justin Timberlake, Mrs. Jay-Z will be rocking the highly televised event although is yet to be revealed how. This will be the Diva’s first time performing at the Super Bowl though she is no stranger to sports crowds. As a member of the powerhouse girl group Destiny’s Child, Queen B sang the national anthem at several NBA events.

Our Lady B is going to find herself busy in the next few months preparing for this paramount performance which will happen just under a month after she rings in the first birthday of her daughter with rapper Jay-Z, Blue Ivy Carter. The couple was blessed with their first child January 7, 2012. The moment was particularly special to the couple who had faced the trauma of a miscarriage as revealed in the lyrics of Jay-Z’s Glory. Of course the loving parents have been notoriously protective of their little girl’s privacy. Could Beyonce take advantage of the massive Super Bowl audience to audition The Notorious B.I.C.?

It has been quite a year for the new mother and glorified goddess, but as Beyonce proves, she is truly a professional and a performer at heart. Music fans and football fans alike are in store for a spectacle that will live on in amateur night drag shows for the next decade.

While I personally believe that “Paranormal Activity” is what it takes to turn that woman into red carpet perfect it can’t be denied that there are worse role models on worse platforms. Beyonce is multi-talented and deserving of the reach of a super bowl performance. Beyonce is going to explode through televisions all over the world and remind us that some celebrities never forget that without fandom they would still be cycling through dark skinned back-up singers in Dyed to Match thigh high boots.