Will Kim Kardashian Sue Kris Humphries For Dragging Out Their Divorce? 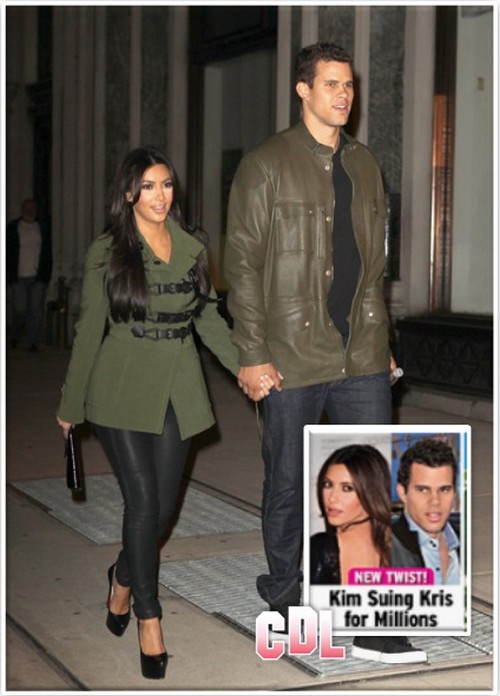 In case you forgot, Kim Kardashian and Kris Humphries are still married – and still battling over a divorce. But Kim’s about as tired of the whole thing as we are and is considering suing her husband of 72 days if he doesn’t hurry up and cut her loose once and for all. They’ve been at this nasty thing for the past 13 months. Word to the wise – if your divorce battle is longer than your marriage then just sign the damn papers.

“She has instructed her lawyer, Laura Wasser, to give Kris and his lawyers an ultimatum: Settle now or she will sue,” a friend told In Touch magazine. “So Laura went to Kris’ lawyer and said, ‘You’ll never win this case, and if you continue to drag this out we’ll sue you, and you’ll have to pay Kim’s legal fees.’ This could cost Kris millions. Kim will launch a counterattack for defamation of character. You can’t put a price tag on what Kris has cost her.”

At this point do you really think Kim cares about her character or does she just want to hurry up and get rid of Humphries so she can finally marry and have babies with Kanye West? The world seems to be OK with Kim moving on and getting serious with Kanye while married but I doubt they’ll be so down with her getting knocked up before all the paperwork has been finalized. And seriously (and you know I’m loathe to ever side with Kim Kardashian) but at this point what is Kris’ game? I know he wants to embarrass and expose Kim and the marriage as a fraud but someone should take him aside and tell him that this is all last year’s news. Kim Kardashian is the Teflon Don of reality TV. Bad shit doesn’t stick to her. I have no idea why! But it is what it is. Humphries is fighting a losing battle and he’s the only one who doesn’t know it.

What do you think? Will Kim Kardashian sue Kris Humphries? Should she at this point?