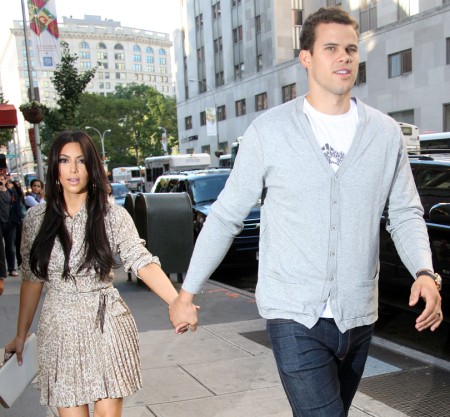 The day of reckoning is upon Kim Kardashian as she and estranged husband, Kris Humphries, have finally been scheduled to have their depositions taken in their bitter divorce proceedings at the end of June. The couple are in dispute on how to terminate the 72-day marriage. Kim wants a plain old divorce while Kris wants to humiliate his bride with an annulment base on fraud.

“Kim is just livid that she has to be deposed,” a source told RadarOnline.com. “She has tried to get out of it, but there is no way she can.”

Kim’s deposition will take place at her lawyer’s office with Kris’s lawyer doing most of the questioning. That’s going to be pretty heavy stuff since Kris has been adamant about Kim telling the truth about why she married him in the first place. Um… because you were such a catch? He’s been telling everyone that she married him for her television show’s ratings. I’m sensing a lot of ugly face tears in the day-long session. RadarOnline also reports Kris’s lawyer plans to ask Kim about her decision to keep a $325k white Ferrari wedding gift. There will also be questions about jewelry that is up for dispute.

Kim’s lawyer will travel to Minnesota at the end of June to depose Kris in his off season. I’m sensing a lot of monosyllabic, smug, angry words in that session. “Kris is ready for his deposition to be taken and just wants the truth to get out about what really happened when they were dating and after the wedding,” the source said.

Kim’s attorney recently accused the New Jersey Net if he was prolonging his divorce from Kardashian in a bid to humiliate the reality star. Kris denied the accusation… probably while giggling.

I’ve said before that I don’t feel sorry for Kim. She should have known better. She did wrong by Kris and I’m actually impressed he’s going after her like this. Most guys might be intimidated by the Kardashian name and just sulk away but Kris is determined to drag her name through the mud a little longer. Kim will be OK in the end. She always seems to come out smelling like roses and it will be good drama for the show. So, really, it’s a win/win situation for all, don’t you think? Kris gets his revenge and Kim gets her ratings.