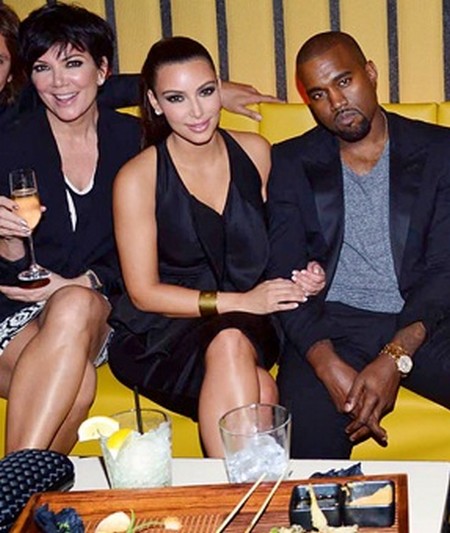 Kanye West is in a panic because he fears that more plastic surgery will kill Kris Jenner.  Kanye lost his mom to cosmetic surgery gone really bad and he doesn’t want his future mother-in-law to suffer the same fate.  Sources report that Kris has become like a second mother to Kim Kardashian’s new boyfriend and the bewitched rapper is lapping the attention up.

With all the plastic surgery the Kardashian-Jenner clan undergo it is a wonder that they don’t have a full-time surgical unit for their exclusive use.  Maybe they do!   Just the pair of Momanager Kris and father of the year Bruce Jenner could keep the team busy.  Cosmetic surgery for these reality TV show freaks is as much a part of their lives as is diet and exercise.

KANYE WEST is pleading with GF KIM KARDASHIAN’s mom Kris Jen­ner to stop having plastic surgery because he’s afraid she’ll end up dead like his own mother. The rap star’s mom Donda West tragically died at the age of 58 in November 2007 – one day after getting a tummy tuck, breast reduction and lipo­suction.

“That loss crushed Kanye,” revealed a close source. “She wasn’t just his mom but his manager as well – just like Kris is Kim’s manager. The parallels are uncanny. Kanye’s gotten very close to Kris. She’s become like a second mom to him, and he couldn’t bear losing another person in his life to plastic surgery. Kanye told Kris, ‘I don’t want to lose ya, baby!’”

Friends and family of the Kardashi­ans’ 56-year-old “momager” fear that she will go overboard with her nip-and-tuck opera­tions. Just before her daughter Kim’s short-lived Aug. 20 marriage to Kris Humphries, her mom announced: “I need a little freshening up.” And as cameras rolled, she headed off to see a plastic sur­geon. Clearly nervous before the procedure, she admitted: “I don’t want to die.”

But Kris could have died from embarrass­ment when a new trailer for the upcom­ing season of the E! reality show “Keeping Up with the Kardashi­ans” showed her with her top lip enormously swollen in a “trout pout.”

“It appeared that the lip was temporarily disfigured from col­lagen injections,” said the source. “She looked positively freakish, and (her children) Kim and Rob were alarmed.” Everyone is worried that her plastic surgery kick “will veer dan­gerously out of control,” confided the source.

But no one is more worried than Kanye, 34, who feels increasingly like a part of the Kardashian family. After only a few months of ro­mancing Kim, he’s already talking marriage with her. The rapper was previously engaged to Alexis Phifer in August 2006. But their joyous plans collapsed after the shocking, unexpected death of Kanye’s mom – and it haunts him.

Does Kanye fear for Kris’ life or is this a great way for The Enquirer to poke fun at Kris’ excessive use of cosmetic surgery?  What do you think?  Will more plastic surgery kill Kris Jenner?  If so she’s in big trouble.