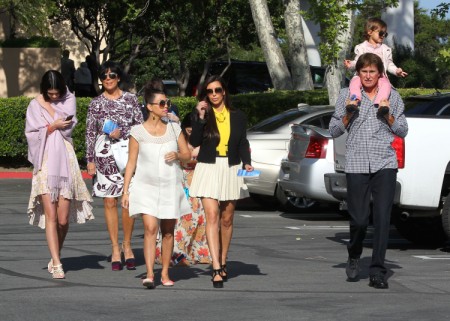 Esquire magazine appointed Bruce Jenner Father of the Year and brilliantly reminded us what made the man commonly known as Kim Kardashian’s stepfather so famous to begin with.

I have some issues with the Kardashian women. I try not to be too hard on them or take them too seriously because I know they’re playing roles and trying to sell tabloids but they still can irk me. But I love Bruce Jenner. I can’t help it. I don’t care about the plastic surgery or the emasculation he faces on a show to show basis. Whenever I hear him yell at one of the girls for making yet another stupid decision I can’t help but smile because he sounds just like any other tired and fed up dad.

But he’s such an enigma to me in that he’s known for his insatiable work ethic. You don’t just win gold at the Olympics unless you are insanely dedicated to working harder than EVERYONE else. His fame was a result of the game he won. The Kardashian women’s fame is the game. It’s an interesting dichotomy but one he’s fully aware of.

In the recent issue of Esquire he says, “I was as close to perfection as I could possibly get. I got everything out of myself. It’s about working when nobody’s watching.”

He goes on to discuss the Kardashian empire. “Being a celebrity is a business. That’s how you have to look at this, and by that measure, this is a very successful business.”

And he plays his role in it well. True, he didn’t marry a famous pro athlete, create a sex tape or pose for Playboy but he is the moral center for the family and always the voice of reason. It works. Esquire sums it up nicely when it writes, “What those people who hate this family from afar can’t see is the very particular love that stamps it. Bruce Jenner has taken it upon himself to rescue his ridiculous extended clan by doing what none of its other members will ever do: He has elected to lose. The person in the house who has most earned his fame has chosen to accept the least of it.”

I believe he can sit back now and watch the tomfoolery unfolding around him without grasping to be in front of the cameras because for one moment in time, Bruce Jenner was absolutely brilliant and the whole world was watching.

I think that’s worth a thousand sex tapes and thankfully, he does to.