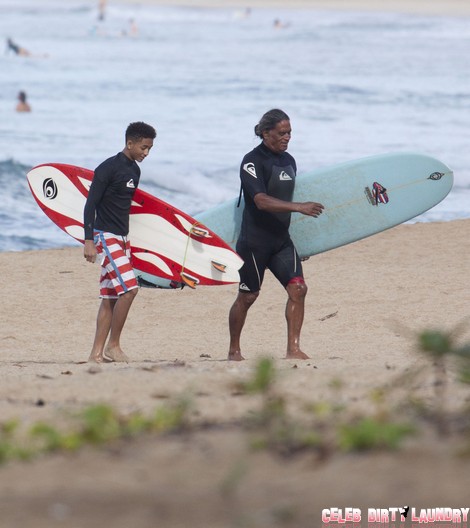 Jaden Smith Goes For It! Jaden Smith, 14 year old son of actors Will Smith and Jada Pinkett-Smith, who starred in the “Karate Kid”, movie.  Well he has taken to the waves.  That’s right chicas this little bobocito has taken to surfing!  Now I don’t like to categorize or speak demographics, Omm… what the heck…I’m going to put it as the most politically correct way as I know how. Most  minorities I’ll just say this blankly do not like the  deep water, especially if they grew up in the city, surfing is not really a common thing.

Whew…I think I said that good enough. I say Bravo to him but let’s face it he lives in California!  Now moving right along this little one was spotted at LAX with his parents and sister to go away to Hawaii. Wait one minute was he not sporting a new hair cut that looked very nice, kind of looked sporty for a hip kid his age.

What is afoot that Ms. Lisa heard is that rumor regarding Kris Jenner-Kardashian, Momanager for the Kardashian Klan, allegedly tried to fix up her daughter Kendall Jenner, 17, and Jaden to go out on public dates together.  They also reported that his mother Jada had a hand in this “arrangement”.

Chicas’ when is it ever going to end with the constant stories, rumors, etc. regarding the Kardashians’, man alive!  Jada’s publicist came out on record and said this was completely false and that they are only “friends”.  First of all from Kris Jenner’s bad reputation I can understand how some would believe it to be true.  On the other hand knowing how much Will Smith loves his children and likes his privacy – he is not a publicity whore like Kris, I think they are just friends. My advice to Jada is that is Kendall is one friend he can keep at arm’s length and will help him stay away from the tabloids, I’m just saying!