BY Jeanne Adams on May 26, 2012 | Comments: Leave Comments
Related : Will Smith, Willow Smith 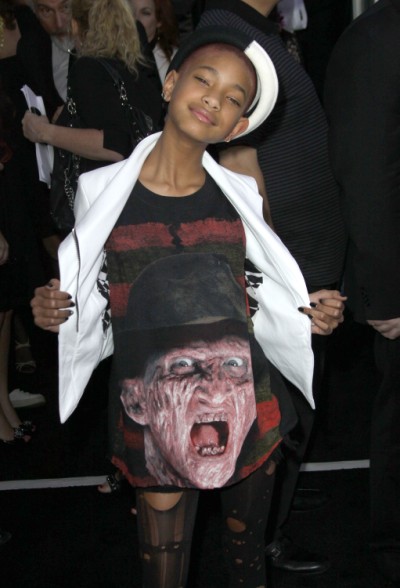 Willow Smith knows all to well that even cool, rapper, movie star dads can be stuck in the dark ages when it comes to dating. While out promoting Men in Black 3, Willow’s famous father, Will Smith, said his hair-whippin’ 11-year-old’s maturity was freaking him out.

“It’s coming, and I’m nervous about it,” Smith told People magazine. “Having two boys and a girl, I realize that boys take trouble to other people’s houses, and girls bring it home. So, the thing we are struggling with is the rules, and setting fair rules for the boys and for Willow, but she’s not having any of that.”

I could see that. Willow looks like she carries a hefty sized attitude along with that buzzed head and fierce stare. But Will’s not intimated, in fact, he says he’ll do all the intimidating when Willow starts bringing boys back to meet the family.

“When Willow does bring a boy home, I’m going to screen him and find out everything about him,” Smith said. “And that’s going to happen when she’s 40, when she’s allowed to go on dates!”

Oh, I think it will happen way before that. Her eclectic career is ready to launch into the stratosphere with the Annie remake that Will is producing. And he’s bringing in the big guns to make sure it’s a success. Spin magazine reported that Jay-Z has been brought aboard to oversee the music for the remake. Oscar winner Emma Thompson is writing the film.

Smith has taken an active role in his children’s entertainment careers and even stepped back from the spotlight so he could focus on building the Smith brand more. He’s been criticised for pushing his children into show business but he recently told the Columbus Dispatch he and wife, Jada Smith, know their talented tykes’ limits.

“Jada and I talk about whether you pull back during the teenage years,” he told the newspaper. “I lump the responsibility on them. I give them as much weight as they can hold without breaking. I’ll keep doing this until they can hold the weight of their lives.”

I have no problem with Will and Jada’s managing. It seems like the kids really want this success so they are helping them achieve their dreams. We’ll just have to wait and see if Willow rebels or not. She has the look of rebellion in her, don’t you think? Or is it just the Freddy Krueger T-shirt?