BY Sarah Silverthorne on June 2, 2012 | Comments: one comment
Related : Kate Middleton, The Queen 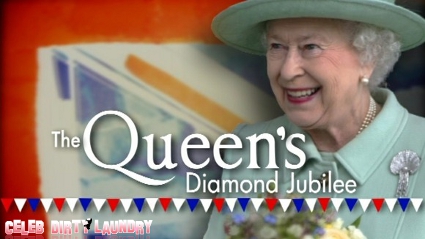 Queen Elizabeth II is in her 60th year on the throne, and she was hot and sizzling as she attended her glorious Diamond Jubilee Celebration accompanied by Kate Middleton and Prince William. Celebrate she must, and what better way to spend her Saturday than at the races. Today marks the beginning of a four-day celebration, with the Queen accompanied by tens of thousands of people who will help celebrate the milestone year. Kate Middleton and Prince William are two of the more popular royals that Americans will be watching on the television, and you can bet your bottom they’re going to be exuding the fanciness and classiness that only royals can.

The festivities began today by starting off with a 41-gun salute fired by the King’s Troop, Royal Horse Artillery at Horse Guards Parade in central London.  Later this weekend the Queen will make a trip down the River Thames followed by a concert.  She is a busy bee indeed.  And to think your Royal Highness is 86 years young.  Nothing seems to be stopping her.

She was joined by her husband, Prince Philip, at Epsom racecourse — which is one of the year’s biggest horseracing meetings.   She arrived in style — naturally — in a Bentley, waving at the huge crowd with a pleasant smile on her face that only the Queen can do so well.

Members of the royal family, including her granddaughters Princess Beatrice and Princess Eugenie, also accompanied her.

The Queen took to the throne in 1952 upon the death of her father, King George VI; therefore, most of the people of Britain have known no other monarch.

The Jubilee events will end Tuesday, with a religious service at St. Paul’s cathedral where the Queen will make an appearance along with her children and grandchildren.