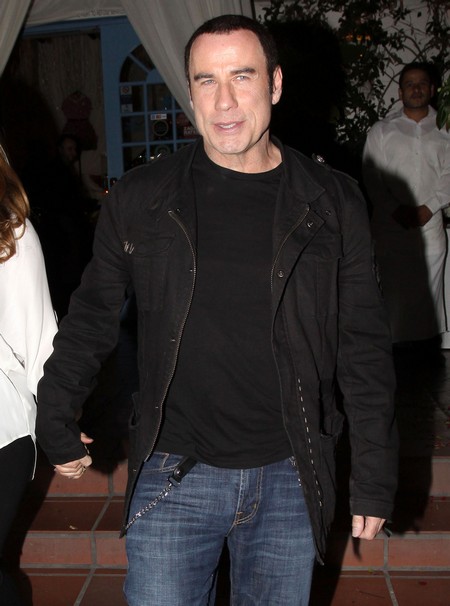 Apparently all you need is a hamburger and a penis to grease John Travolta’s wheels.  John Doe, the masseur who claims Travolta sexually harassed him claims he has proof that the Pulp Fiction star fondled his private parts during what was supposed to be a routine massage last January in Los Angeles.

He would not say what kind of proof but he did say he passed a lie-detector test hosted by the National Enquirer. Yep, we’ve got a veritable Abraham Lincoln over here.

Naturally, Travolta’s lawyer, Marty Singer, is denying all John Doe’s claims. He says they are unfounded since Travolta wasn’t even in Los Angeles on that date. He says the accusations are, “complete fiction and fabrications.”

But John Doe won’t back down. Lawsuit documents reveal the massage took place in a bungalow at The Beverly Hilton Hotel with Radar Online reporting the masseur saying, “Travolta appeared to be semi-erect.” A chef brought in hamburgers during the massage and Travolta “touched Plaintiff’s scrotum, and this time the Plaintiff told Travolta to please not touch him again.” After the actor promised not to “Travolta quickly tried to rub the head of Plaintiff’s penis as he tried to pull away.”

Sounds like Travolta has a hard time saying no to carbs and funny business. Is anyone else picturing George Castanza eating a sandwich while having sex? Who gets a hamburger during a massage, honestly? That’s weirder than everything else combined.

Anyway, Singer is bullying Doe saying he will “regret” filing the lawsuit. But Doe responded, “I represent the 99 per cent of the population, the working class, and I was put in an inappropriate situation that I didn’t put myself in.  It is not for Mr. Singer to deny me my right!”

He’s definitely right on. He does have the right to press charges. And we have the right to sit back and watch because this isn’t going to be pretty for Travolta. It doesn’t matter if it’s not one percent true at this point. It’s out there and it’s going to stay out there in rumor heaven further validating the whispers that the famous Scientologist isn’t exactly faithful to his wife, Kelly Preston, and that his appetites aren’t exactly female oriented.

Do you think there’s fire to this smoke or do people prey on John Travolta because of the homosexual rumors that continue to dog him?  Of course, if people do prey on Johnny this doesn’t mean the masseur’s accusations are false!