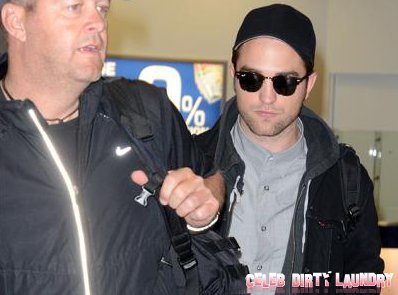 Robert Pattinson, having to fly to Toronto to promote his new film Cosmopolis, forced Kristen Stewart to make out with herself as she accepted the 2012 MTV Movie Award For Best Kiss.

The whole situation was bittersweet for me. Why? Well, as devastated as I was to not see my boyfriend join Kristen Stewart onstage to accept the coveted Best Kiss award — one that was their fourth consecutive win since starting the Twilight franchise — I was secretly smiling inside because RPattz was roaming around my city. I’m a Torontonian, so you bet your ass I’ll be on the hunt for my guy . . . that is if he doesn’t call me first of course.

RPattz was spotted arriving at Toronto Pearson International Airport in Toronto yesterday, looking like his cool and casual usual self.  He is gearing up for international promotions of Cosmopolis, which was directed by David Cronenberg and was also shot in the city.  While Rob was touching down on my Canadian turf, his girlfriend Kristen was busy accepting her popcorn trophy on behalf of her and Rob.  I’m sure he would have been proud.

“Rob’s not here guys. I’m not sure what to do. Huntsman? Where’s my Huntsman? Chris Hemsworth? Charlize Theron, will you help me out? No, OK. Taylor Lautner, help an old friend? It’s ok, I do pretty well by myself I think.”

It was actually quite cute — and not painfully awkward as she usually is.  The girl made me proud. While no one helped her out with a kiss, Kristen jokingly turned around and mimicked making out with herself.  Who new she was the little comedic vixen?

So, although Robbie wasn’t there, they won. I was proud, but even prouder that he’s on my home turf — and that’s what matters the most.