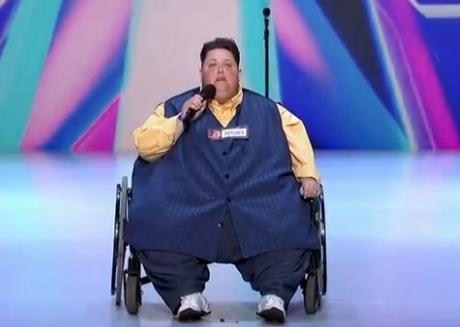 The final X-Factor USA audition round aired last night and we’ll finally be able to see in the following weeks which acts will continue their amazing run on the show, and which acts fall so far behind that they become television cannon fodder. We’ve had bizarre, startling and inspiring performances, but perhaps none as significant as Jeffrey Gutt, Jillian Jensen, Freddie Combs and David Correy’s tear-juice renditions. We already have information on which acts will make it through to the live rounds, but we won’t spoil it for you. The future of X-Factor will eventually be in your hands. Who will you vote for? Read below for a full performance review of last night’s performances.

The 13-year-old Trevor Moran was the first contestant of the night with his rendition of “Sexy and I Know It” by LMFAO. The cutest, most exciting performance we have ever seen on The X-Factor took place when Trevor grinded, jived and booty-pumped to the catchy tune. Lady Gaga-esque in the presentation and vocally cool all round, Trevor, who was dehydrated and ill, became a 13-year-old force to be reckoned with. This had to be the coolest kid since Doogie Howser MD! We were astonished! The judges gave Trevor 4 out of 4. We’re agreeing, giving him a pat on the head and 4 out of 4!

Owen Stuart, a love obsessed 16-year-old, followed the brilliant Trevor Moran with his rendition of “Airplanes” by B.O.B Feat. Hayley Williams (Paramore). The vocals were stuck in the wasteland of teenage hormones and the terrible arrangement lacked any real emotion. Owen was able to pull off the rapping section of the song with an above average rendition and fast lyrics, but his performance was nowhere near the standard required for X-Factor. Britney Spears didn’t like it, but the three other judges did and gave him a yes. We’re giving Owen a lackluster 2 out of 4.

Freddie Combs, a 540 lbs man in a wheelchair, was next with his rendition of “Wind Beneath My Wings” by Bette Midler. Freddie completely blew us away and captivated us with his remarkable courage and voice. His smooth tone and powerful vibrato radiated with emotion and an unforgiving beauty. Freddie was an example of never judging a book by the cover. The judges gave him 4 out of 4 and made him promise to get better and become healthier again. We’re giving Freddie a very, very emotional 4 out of 4.

The penultimate contestant of the night was the Jennifer Connelly lookalike, Lauren Jauregui, with her rendition of “If I Ain’t Got You” by Alicia Keys. This 16-year-old powerhouse pulled off a very difficult Alicia Keys classic. The song contains overpowering runs and mellow upper falsettos, which makes it one of the most difficult songs in the current audition library. Lauren gave a technical and non-affected performance. She received 4 out of 4 from the judges. We’re giving her an electrifying 4 out of 4.

The cutie pie Jordyn Foley was the last contestant of the night with her rendition of “Tomorrow” from the seminal classic Annie. This song has to be one of the most over-done songs of all time, right up there with “You Raise Me Up” by Josh Groban, “I Believe I Can Fly” by R. Kelly and “Unchained Melody” by the Righteous Brothers. We’re all for cute kids on reality talent shows, but Jordyn basically delivered a cookie-cutter Broadway performance. Jordyn was a bizarre symbol of what X-Factor has been so far this season – mundane, annoying and below average. Simon Cowell said no, but the other judges all gave Jordyn a yes. We’re giving Jordyn a bizarre 2 out of 4 for her performance.

Do you agree with our scores? Who would you have chosen as the best act of the audition rounds? Who made your heart break and your face leak? Let us know in the comments below and remember to bookmark Celeb Dirty Laundry for X-Factor news, reviews, spoilers and recaps.