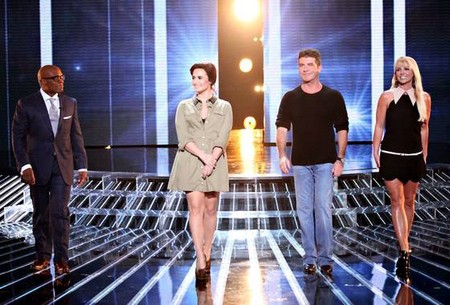 The X-Factor USA’s first live vote-off show was an emotionally charged tour-de-force. We lost four die-hard contestants to the crumbling cookie, including Willie Jones, David Correy, Diamond White, and Sister C. Luckily for us, we’ll be able to pick up those phones next week and vote for our favourites. Celeb Dirty Laundry took a long, hard look at the survival sing-offs, the survival performances, and whether the respective judges made the correct decisions. Therefore, without further adieu, take a look below and see how your favourite was rated by us.

CeCe Frey Vs Willie Jones – CeCe performs well under pressure, which is one of the most important aspects to becoming an excellent X-Factor contestant. Her Irene Cara survival song’s lyrics fit well with the situation, but the performance came off as a tad bit too musical theatre. CeCe picked it up near the money notes and delivered a controlled and impactful performance. Willie, on the other hand, had been battling to keep up with the competition. He received too many reprieves from the judges, especially after his horrid lyric debacle during the Boot Camp phase of the competition. His performance of last night was wrought with Las Vegas-gone-wrong moments and over-the-top silliness. His Ray Charles rendition during the survival sing-off was out-of-date and lacked any emotive quality. DID DEMI MAKE THE CORRECT CHOICE? Unequivocally, yes. CeCe still has a long competition ahead of her.

David Correy Vs Jason Brock – David was one of our favourite contestants last night. His Whitney Houston performance was gutsy and enthralling. However, his Kelly Clarkson hit during the sing-off, was not gutsy, nor enthralling. We agree with Simon that Correy’s rendition of “Since U Been Gone” was too theatrical. He hit all of the money notes, but it came off as heavy handed. Jason’s theatricality cost him during last night’s horrid performance. However, choosing Whitney Houston’s seminal hit, “One Moment In Time”, during the survival stage of the competition, might have been a bit too risky. His rendition of this Whitney hit was theatrical, pageant-like, and extremely over-the-top. He missed quite a few of the Whitney money notes, but made up for it in his almost pitch-perfect control. DID L.A. MAKE THE CORRECT CHOICE? We’re not sure. David Correy completely blasted away the competition last night, and Jason has been languishing in Las Vegas pageantry for much too long.

Arin Ray Vs Diamond White – Neither of these contestants deserved to be in the bottom two, but hey, that’s why we’ll all be able to vote next week! Arin’s vocals were exquisite. The performance was reined in and simplistic. His voice was unaffected, clean, and almost pitch-perfect. Arin was a superstar during the sing-off. Diamond, one of our all time favourites, was not completely up to par during the sing-off. She lost control during the monotonous and over sung Elton John classic. DID BRITNEY MAKE THE CORRECT CHOICE? If based on Arin’s spectacular performance, unfortunately, yes.

Sister C Vs 1432 – Sister C has never really been our favourite group in the competition. They were miniscule during their first live performance, and completely lacked any super star quality. Their Miley Cyrus rendition during the survival phase was, as with their previous performances, too affected and nasal. They were just not on the same level as the other acts in the competition. 1432 pulled it out of the bag and slaughtered Demi Lovato’s vocally charged ballad. Their performance was emotive and nostalgic. There’s a reason this group has been touted as the girl group to watch this season. DID SIMON MAKE THE CORRECT CHOICE? Without an iota of doubt, yes, yes, yes!

What do you think? Do you think the judges made the correct decisions? Let us know your thoughts in the comments below. Remember to bookmark Celeb Dirty Laundry for X-Factor news, reviews, and spoilers!