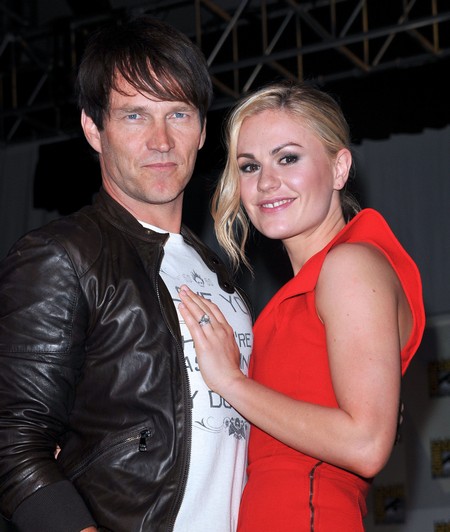 Yes, Anna Paquin is married AND pregnant with hubby, Stephen Moyer’s baby, but she insists she’s still attracted to women – and she claims she won’t use plastic surgery to fix her flaws.  The True Blood star has recently come under fire from critics claiming she was insincere about her sexuality in the past.  As if bisexual people can’t marry and procreate?

Back in 2010, shortly before marrying Moyer she declared her bisexuality in a Public Service Announcement called Give A Damn.  She is speaking out again, this time in Zooey magazine, in an attempt to silence her critics,

I’m sure for some people saying they’re bisexual feels less scary than making a statement that they’re gay.  For me, it’s not really an issue because I’m someone who believes being bisexual is actually a thing. It’s not made up. It’s not a lack of decision. It’s not being greedy or numerous other ignorant things I’ve heard at this point.  For a bisexual, it’s not about gender. That’s not the deciding factor for who they’re attracted to.”

Paquin is just as outspoken when it comes to plastic surgery – she wants none of it!  Of course let’s see what she has to say in 10 years…

“Interestingly enough, I don’t really care about my teeth, but I think any woman on this planet could say, ‘I wish my ass was smaller, my arms were thinner and I had green eyes not brown.  I think anyone is as critical as they have the energy to self-obsess, but I also know as an actress you are more limited if you interfere with your looks.  “If you have a whole bunch of work done with your teeth and your face and your boobs then you’re only going to play modern people. That’s a big choice to make. Very limiting.”

It’s unusual and kind of nice to find an actress that sees plastic surgery as limiting their career rather than as a ticket to prolonging it. Do you agree with Paquin’s take on being bisexual?  Tell us in the comments section below.