Zooey Deschanel Looks Sexy On The Cover Of Marie Claire 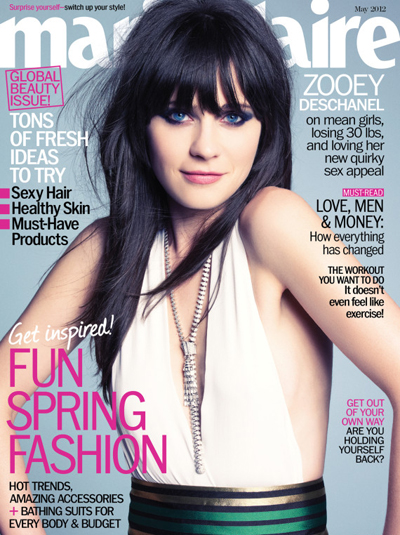 Zooey Deschanel has a lot to celebrate this week! Not only did her TV show, New Girl, get renewed for a second season on Fox, but the 32-year-old actress’ cover of the May issue Marie Claire was released, and, boy, does she look stunning!

Inside the magazine, Zooey talked about her recent divorce and pouted and posed her way through the photo spread, which Huffington Post raved as being “sultry.” (It probably helps that the multi-talented performer showed off some side-cleavage as well.)

Among the highlights of the interview is Zooey’s admission that motherhood may not be in the cards for her, as it was never an ambition.

She also revealed that she hasn’t had time to even think about dating, let alone future children, since splitting from her husband of 2 years, Deathcab for Cutie frontman Ben Gibbard, last fall.

“Honestly, I’m just going through a divorce, so I don’t really think that’s something I want to get into now,” she said. “I don’t have time to date. I literally — don’t-have-time.“

With a new season of New Girl in the works and her two side careers as a singer and part-owner of the website HelloGiggles, it seems totally understandable that Ms. Deschanel might be a little time-crunched these days!