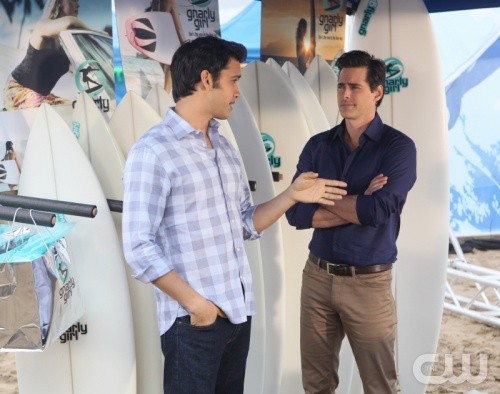 Tonight on the CW a new episode of 90210 returns called, “Life’s a Beach.” On tonight’s Liam (Matt Lanter) decides to open his own custom surfboard shop for women, but things get complicated when he becomes romantically involved with his first investor. Did you watch the episode? We did and we recapped it here for you!

On last week’s show Naomi decided to open a restaurant with her half-brother Mark, while Dixon booked Michaela  to perform at the restaurant opening, unbeknownst to Silver.  Annie felt confused about her newly re-surfaced feelings for Liam and Navid agreed to escort Campbell’s  fiancé to an event, only to find out Campbell was cheating on her. Trevor Donovan and Jessica Lowndes also starred. Bethany Rooney directed the episode written by Brian Dawson.

On tonight’s show LIAM MIXES BUSINESS AND PLEASURE WITH DISASTEROUS RESULTS – Liam decides to open his own custom surfboard shop for women, but things get complicated when he becomes romantically involved with his first investor. Naomi tries to convince Mark (guest star Charlie Weber) to stay in Los Angeles after he receives an offer to be head chef at a restaurant in New York, while Dixon convinces Silver to direct Michaela’s (guest star Lyndon Smith) first music video before she gets pregnant. Shenae Grimes, Michael Steger, Trevor Donovan and Jessica Lowndes also star. Michael Zinberg directed the episode written by Bill Brown.

Tonight’s 90210 episode 16 is going to be exciting, and you won’t want to miss. So be sure to tune in for our live coverage of 90210 — tonight at 9PM EST! While you wait for our recap, hit the comments and let us know how you are enjoying Season 5 of 90210? Check out a Sneak peek video of tonight’s episode below!

Tonight’s episode gets a jump start when Mark gets an offer from a popular restaurant in NYC. Naomi wants to convince him to stay in L.A. Working with her but it looks like it’ll be tricky. Liam is planning on opening a custom surfboard shop but finds himself very distracted by a hot blonde. Adrienna is more than a little interested in Mark and she tips her hand to Naomi. Obviously this is great news. Naomi makes sure that Adrienna is trying on bikini’s the next time that Mark comes by and then she conveniently leaves them alone.

Annie is at Liam’s and answers the phone when Sydney, the chick from the surfboard shop calls. He confesses that they hooked up which is making it really awkward now that she wants to be his first investor. Meanwhile Dixon spent the day working on Michaela’s  music video and they have one day left to shoot. That turns into a problem, when Michaela’s IVF procedure is bumped up to the next day. He loses money on the shoot and can’t afford a do over. He feels like a jerk for even feeling bad about it  because a music career doesn’t compare to wanting a kid.

Annie and Naomi end up fighting over Mark. Annie realizes that Naomi is trying to pull strings to keep Mark from taking the great opportunity in NY. Liam sees Sydney on the beach and she loves the custom surfboard.  She also confesses to him that she doesn’t want a relationship with him because she’s married. He cuts her off then and there.

Everyone is at the beach and although Michaela is supposed to be on bed rest, she’s ready to perform live. Silver set it up so that Dixon can get live performance footage. Naomi and Annie finally make up. They agree that they both suck  and are really like sisters at heart. Michaela dedicates her performance to Dixon and he is stunned to realize that the video is going to happen because Silver arranged a flash mob.

Adrianna talks to Silver and tells her that she got the distinct feeling that Mark was into her. Mark also decides that he is staying in LA and will either sink or swim in business with Naomi. Liam decides that sleeping with Sydney is ok at least for right now and the episode ends with Michaela finding out she’s pregnant. Tune in next week for more 90210!