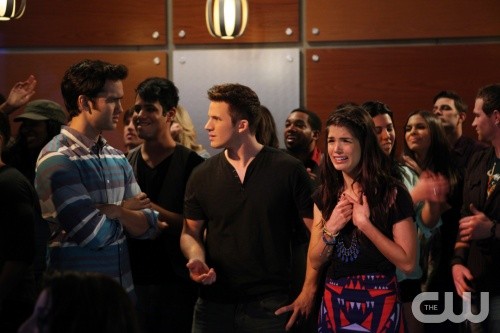 Tonight on the CW a new episode of 90210 returns called, “The Empire State Strikes Back.”  On tonight’s show Naomi travels to New York to make a good impression on Jordan’s (guest star Robbie Jones) mother, Cheryl (guest star Robin Givens) with disastrous consequences.. Did you watch the episode? We did and we recapped it here for you!

On last week’s show  Anne was forced to reveal she was author X – Jordan (guest star Robbie Jones) asked Naomi to plan a launch party for the latest hot writer, known as Author X, which forced Annie to admit that she is Author X. Silver worried that Adrianna was not okay that she was dating Mark (guest star Charlie Weber). Meanwhile, Dixon found out that Michaela (guest star Lyndon Smith) had feelings for Navid. Matt Lanter, Trevor Donovan also starred. Bethany Rooney directed the episode written by Scott Weinger.

On tonight’s show Liam and Navid, in an effort to get teenage pro-surfer Cassie (guest star Marie Avgeropoulos) to be their first sponsored athlete, ask her favorite musician Olly Murs to do a special performance. Naomi travels to New York to make a good impression on Jordan’s (guest star Robbie Jones) mother, Cheryl (guest star Robin Givens) with disastrous consequences. Annie decides to publicly say her novel is fiction but Dixon persuades her to tell the truth. Jessica Stroup and Jessica Lowndes also star. Stuart Gillard directed the episode written by Scott Weinger.

Tonight’s 90210 episode 19 is going to be exciting, and you won’t want to miss. So be sure to tune in for our live coverage of 90210 — tonight at 9PM EST! While you wait for our recap, hit the comments and let us know how you are enjoying Season 5 of 90210? Check out a Sneak peek video of tonight’s episode below!

Tonight’s episode begins exactly where we left off last week, with Patrick at Annie’s door. He isn’t going to let her ruin his marriage and is demanding that she cancel her Nany O’Dell interview. If she reveals that she is author X then he will ruin her family. She calls Dixon to come and talk. Before he can get out the door he convinces Silver to let Makaela to be able to perform one song at a tribute concert. Finally when Dixon gets to Annie’s she tells him that she earned the money last year to help him, by being Patrick’s escort. She tells him that Patrick has threatened her if she tells the truth and Dixon can’t even cope with the situation. He punches stuff and leaves.

Liam and Navid are moving ahead  with their custom surfboard business and they are trying to get Cassie to be their first pro sponsor. She wheels and deals and tells them that if they get Olly Murs to perform a special concert. Meanwhile Naomi, Jordan, Mark and Silver are all heading to New York along with Annie. Naomi suggests that instead of admitting her book is 100% true just bluff and say the people are made up and the experiences a mish mash of her life.

Dixon kind of comes to his senses about Annie and realizes she scraped the bottom of the moral battle in order to be able to pay for his rehab so he needs to help her now. Adrienna and Makaela are on a mission to find the perfect song to perform, but it’s a tricky task. Eventually Adrienna comes up with lyrics that speak well for how Makeala is feeling.

Dixon looks up Patrick and decides to pay him a visit. Patrick answers the door with his wife by his side. Dixon pulls him aside and tells him never to threaten his family again. Naomi finally gets to meet Jordan’s high maintenance mother Cheryl, who has the knack for swinging insults with a smile. It’s at an heirloom auction and Cheryl insults her for not having a donation. Mark gets up onstage and offers his chef services and the bids roll in, making Naomi look great.

Liam and Navid pull off the impossible and book Olly Murs for Cassie. Of course she agrees to be their sponsor. As Olly plays Cassie bursts into tears watching her ex high school boyfriend kiss another. Liam pulls her up onstage and dedicates the next song to Cassie, with a kiss. Of course it pisses her ex off.  Meanwhile things just got ugly for Naomi. Cheryl wanted to talk to her in private and once the door closes Cheryl whips out a big copy of Naomi’s police record. Cheryl rips Naomi apart and dissects her character as Jordan walks in. Naomi tells her that she doesn’t care what she thinks and gets up and leaves.

Silver and Mark are enjoying street food in NYC when they finally share a real kiss. It’s finally time for Annie to unveil herself on camera. Dixon shows up right before and tells her that he’s backing her. She proceeds to tell the truth and Patrick greets her as she’s leaving the hotel the next day. He tells her payback will be a bitch. Cassie pays Liam a visit and tells him that her mother is making her pull the plug on their deal because Liam was a star in Annie’s book.

Jordan hunts Naomi down and praises her for standing up to his mother. He says that he really wants to date her and she agrees to dinner. Tune in next week for more 90210.