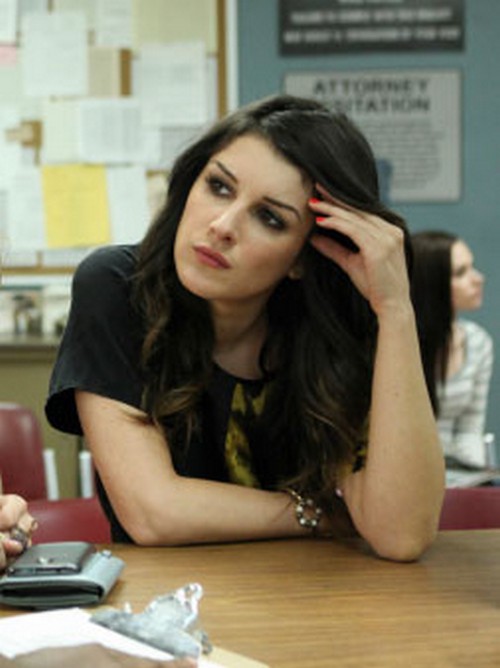 Tonight on the CW a new episode of 90210 returns called, “Scandal Royale.” On tonight’s show Silver is called in to see her doctor about some test results and Annie decides to get over Liam by going to Paris for a book tour. Did you watch the episode? We did and we recapped it here for you!

On last week’s show Jordan (guest star Robbie Jones) called in a favor from his mother (guest star Robin Givens) to help out Mark (guest star Charlie Weber), but in exchange had to end things with Naomi. Annie had to deal with the betrayal Liam felt from being in her book and Michaela (guest star Lyndon Smith) caught Navid and Adrianna during an intimate moment. Jessica Stroup and Tristan Wilds also starred Michael Zinberg directed the episode written by Patti Carr.

On tonight’s show Jordan’s (guest star Robbie Jones) sister Elizabeth (guest star Keke Palmer) gets into trouble with an out-of-control Royal, so Naomi helps out by taking the heat to protect Elizabeth’s reputation. Silver is called in to see her doctor about some test results and Annie decides to get over Liam by going to Paris for a book tour. Meanwhile, Adrianna performs after Fall Out Boy at a big event, but the concert ends in chaos. Michael Steger and Tristan Wilds also star. David Warren directed the episode written by Terrence Coli and Paul Sciarrotta.

Tonight’s 90210 episode 21 is going to be exciting, and you won’t want to miss. So be sure to tune in for our live coverage of 90210 — tonight at 9PM EST! While you wait for our recap, hit the comments and let us know how you are enjoying Season 5 of 90210? Check out a Sneak peek video of tonight’s episode below!

Tonight’s episode starts off with Dixon and Silver flipping out trying to find Makayela who is MIA. They are both taking turns blaming each other for putting tons of stress on her. Silver’s surrogate demands were more than clashing with Dixon wanting her to become a huge singing sensation. They have no idea that what really sent her running was catching Navid and Adrianna in bed together.

After Naomi finally has admitted her feelings for Jordan he makes a deal with his mother that ultimately means cutting Naomi loose. She has no clue of what is really going on and assumes he was just interested in her for the thrill of the chase. As Annie gets ready to head off on her European book tour she contemplates buying the bar from Liam. It’ll help give him a fresh start elsewhere and also it’ll ensure that he’s gone when she gets back.

Naomi tells Annie that Jordan dumped her and Annie explains that she got help from Jordan’s mother but it was going to cost him. Annie thinks he was forced to give up Naomi which makes her feel slightly better. Meanwhile Elizabeth, Jordan’s sister calls Naomi freaking out for help. She’s stuck with an out of control royal heir and knows no one else in LA to help her. Naomi rushes to help Elizabeth before her mom finds out. The royal prince is drunk, naked and bonkers.He goes to get a shower and eventually they find him unconscious wrapped in a robe.

Silver gets the news that she may have cancer and it’s followed by a second gut punch in the form of Teddy at her door. They are fighting of course and decide to look for Makaela. Silver gets a text notifying her that the credit card she gave the girl has been used, at a bar.

Liam and Annie meet with a realtor and there’s a chance they can be in escrow the next day. They go inside and sit at the bar and Liam finds the ring that he once proposed to Annie with. They both think of how different their lives would be if they had gotten married.

Elizabeth’s mom Cheryl comes bursting in and Naomi becomes the willing fall guy in the whole situation. She is thrown out of the hotel room and ends up having a long talk with Jordan.  Silver, Teddy and Dixon finally find Makaela and she tearfully tells Silver that the last time she went to the doctors there was no heartbeat, the baby was gone. She had been working up the courage to tell her the truth.

Cheryl holds a press conference about the Prince being passed out and as the press believes that Elizabeth was partying with him (correctly), Naomi jumps in and takes the blame. She says it was her and that Elizabeth called 911. Makaela also apologizes to Dixon for not being around to rehearse and she also sets the record straight on Adri. They all believe she tried to steal her song but Makeala explains that Adri actually wrote it. Dixon insists (with Makaela’s blessing) that Adri actually perform the song.

Liam decides at the last minute not to sell the bar and to stick around and Silver tells Teddy that there’s no one else she’d rather be with. As Adri finishes singing lighting equipment falls from the ceiling and sets the club on fire! Tune in next time for more 90210!
Cate Meighan