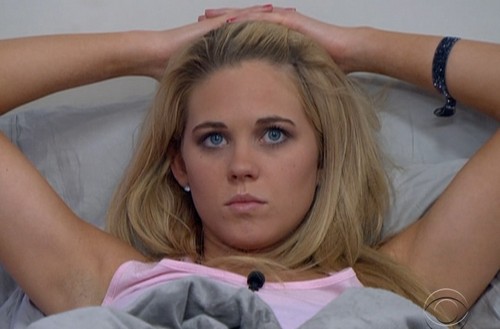 Big Brother 15 contestant and all-around horrible person Aaryn Gries is off the show and pimping herself out to various talk shows and entertainment outlets. Of course, she lost her job in the wake of her horrifying racist and homophobic comments on the show, and she’s obviously desperate for money.

Wow, DELUSIONAL. And she continues to put her foot in her mouth by saying that she wishes that she was warned not to say racist comments on Big Brother because she didn’t realize they would try to ‘paint her’ as a racist. Again, what?! I honestly cannot believe anybody can be this stupid. It’s not humanely possible, is it? I actually prefer the alternative, that she’s just an awful person who’s a racist, but is trying to hide her racism with a bunch of idiotic excuses. That’s what we’re left with – choosing between her being a complete idiot or a manipulative racist.

Of course, Aaryn CONTINUES to claim that she’s not a racist, despite all the evidence to the contrary. She says, “I am not a racist. Sometimes you can say mindless things that will haunt you.”

I wouldn’t even want to excuse this, but if she had said a comment once or even twice during the show, you can maybe let that pass. But she continually, night after night, said the most racist AND homophobic comments to everyone she possibly could, and she’s trying to act like she’s just an ignorant hillbilly from Texas who didn’t know better? Puh-lease. People need to stop giving this racist attention-whore any more attention.