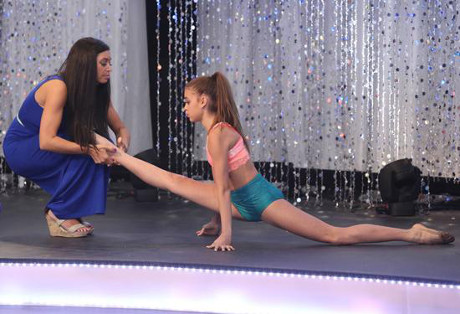 Abby’s Ultimate Dance Competition returns tonight for its 5th episode of season 2 and the focus of tonight’s show is “Anything Can Happen.” If there’s one statement that’s truer than true in the dance world, it really is the fact that anything can happen. And when you’re in the presence of Evil Dance Overlord Abby, we think that’s especially true. If you missed last week’s episode, be sure to check out our LIVE recap of the show, which focused on “Vegas Show Stoppers” — CLICK HERE for recap.

The brief episode summary says the following: “Abby decides to mix things up with the theme for the week being “Unconventional.” Anything can, and will happen, starting with the remaining dancers battling Abby in a martial arts challenge. The winner’s mom gets to decide which dancers land in the bottom three, leading to new fights and some surprise allegiances. To complicate matters further, each dance involves a giant, and sometimes unpredictable, prop.”

Yikes! Sounds like, as always, we’re going to be in for a rocky bumpy, potentially tear-filled journey as these young dancers learn their lessons. Do you enjoy waltzing, hopping, and jumping around the competition dance floors in the presence of Abby? Don’t forget to watch Abby’s Ultimate Dance Competition season 2 episode 5 “Anything Can Happen” tonight on Lifetime at 9/8c.

Come back here later tonight for a LIVE recap in case your life says you’re not allowed to watch this show!

RECAP: Cindy admits to being surprised Kalani left the competition last week, this time Abby doesn’t want to bring skill into the competition; she wants to bring a surprise this time. Abbie brings back Kalani and her daughter, she decides to use the call back card to bring her back into the competition because she believes that there’s a lot of talent. Melanie is surprised to see Kalani come back and thinks that she’s getting special treatment. The mother’s child who wins this time, will get to choose the bottom three contestants. Nito is going to teach the children a Wu Shu combination that’s used in martial arts, Nito shows off the Wu Shu for the chldren to see; it’s easy to tell there are children who are having difficulty with the choreography. Abby wants the kids the children to go against Nito and if they win they’ll go against Abbie in the end. During the challenge, many of the kids do pretty well, except Jojo doesn’t do well at all. Abby is hard on the contestants, and even makes Hailey cry. One of the contestants complain to Abbie, after Abbie decides to give one of the contestants a second chance.

Trinity won the challenge, out of all the contestants she did the best, now the mother gets to choose who’s going to be in the chopping block. Gianna is worried about what her mother said to Abby, Gianna is showing good sportsman ship yet her mother on the other hand is being completely stupid and doesnt understand the respect that is needed in competitions. Gianna’s mother is complaining about the fairness of the competition, and is upset about the whole ordeal. Matt the choreography wants them to use the props, in a way where they don’t touch the ground, they can only dance on the props. Abby is there to watch, the contestants dance on the props, everything goes fine, but Abby is worried about the ending. Kelanie and Gianna are partnered up for the upcoming dance, Abbie mentions how the argument about fairness almost had Gianna out of the competition. Travis and Tyler are working together for a choreograph called top of the pyramid, they both seem to be working hard. The mothers are talking among each other about who Trinity’s mother should decide put in the bottom three. Tiffany starts to complain about the speed of the choreography, Ally is getting annoyed with how her mother is speaking to the choreographer. The choreographer is not pleased with Tiffany complaining about the speed of the choreography and gets thrown out of the room.

The competitors get to the dressing room and are preparing for the upcoming dances, the mothers talk to Tina about how she should send the three top dancers in the bottom three. Kalani wants to do her best today and not be sent out again. Kevin introduces the three judges and Abby talks about the props and how difficult its’s going to be to have precise timing. Abbie mentions how she used her call back card and lets the judges know that she brought back Kalani. Michelle is the only one with a call back card left. Melanie believes that Tina will send the three best in the competition in the bottom three. Trinity Jojo and McKaylee with their performance titled Under The Plank. Abby wants the moms to come out to hear what the judges are going to say about the performance, Abbie mentions how Trinity chocked up in today’s dance and the judges agree with her. Michelle thought Jojo did a great job this performance. The judges feel that Hailey lost confidence in jumping from one platform to another.

Ally is worried about the upcoming performance and wants to do her best, Allie and McKaylee are doing their performance Tangled Web. Abby mentions that they weren’t in sync during the performance, Michelle mentions how Ally has no strength in her back. Richy believes that Ally has star potential, is missing something. Ally mentions how she doesn’t have much of a ballet background, which could be the end for her. Kalani and Gianna do their choreography performance. Abbie believes that she made the right choice to keep Kalani in the competition and mentions that Kalani did amazing his time and Richy completely agrees, he also adds Gianna did a good job. Michelle is glad that Abbie decided to bring Kalani back, she also thought Gianna was great too. Travis and Tyler begin their performance. Abbie says that Travis and Tyler played it far to safe with the prop, Abbie wasn’t impressed much. Richy wasn’t muh impressed either, Michelle finds that Tyler did a good job, but doesn’t think Travis put enough risk in the performance.