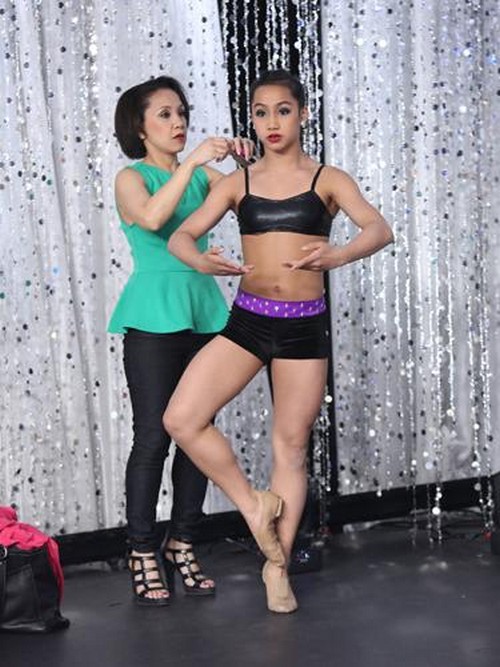 Tonight on Lifetime Abby’s Ultimate Dance Competition returns with another new episode called, “Vegas Show Stoppers.” On this week’s show with the pressure of the surprise immunity reward building, tempers between the moms reach a boiling point. Did you watch last week’s season 2 premiere episode?  We did and we recapped it right here for you.

On last week’s show Abby was the dance goddess of the week and the dancers strived to attain dance immortality when the theme was “Gods and Mortals.” There were nine dancers left and the performers in the last week’s bottom group struggled to prove that they deserved to be in the competition. The skill was “Power” and last week’s challenge winner and her mom got to make all the dance assignments and quickly discovered holding the power wasn’t always easy. One mom got extreme when she overheard the others mothers talking about her daughter’s weaknesses.

On tonight’s show “Las Vegas” is this week’s theme and the remaining dancers are tested with styles they’ve never encountered before. One mom finally snaps and takes on Abby after she gives one too many criticisms about her daughter. With the pressure of the surprise immunity reward building, tempers between the moms reach a boiling point.

Tonight’s episode is going to be a drama packed one, which you won’t want to miss. So be sure to tune in for live coverage of Lifetime’s Abby’s Ultimate Dance Competition Season 2 episode 4 — tonight at 9PM EST.

Gianna is really nervous, she has never done aerial work before and thinks she is going to fall and crack her head open. Trinity has back problems and her mother doesn’t want her to ruin it for a challenge; her mother goes up on stage and interrupts her, Abby is not impressed. Abby tells the dancers they will perform in groups, the first three start Tyler is the first out. Gianna is the next one thrown out, then Haley and Travis. Ally is also out, then Jojo. Then Kalani is out, we are down to two; McKaylee and Trinity. The winner of the challenge was Trinity.

The dancers are practicing and she tells Trinity that she needs to go out there and bring it. Ally and Jojo are practicing, Abby calls Ally boring and tells Jojo to straighten her legs. Gianna and Haley are having to dance in heels and both moms are concerned. Haley’s mom thinks the shows are too high, but Abby disagrees and thinks they should get shows that are even higher.

Cindy gets into a fight with Abby and tells her she knows nothing about children because she doesn’t have any.

McKaylee is trying her best on the aerial and Abby is telling her that she isn’t doing a good job.

Time for the show, our nine dancers are ready to perform. Abby says again that she wants someone who is flexible as a dancer. Richy doesn’t have a call back card anymore, but Rachelle and Abby have one each.

Ally thinks it is hard for her mom because she is not a dance mom, but she is thankful that she is there.

McKaylee and Trinity are next; Rachelle loved their performance, Richy loved the girls as well, Abby thought McKaylee did very well from the beginning, but she didn’t think Trinity did well.

It is time for eliminations, Kalani is the person who is going home and Abby really looks like she is heartbroken. Actually, nobody expected Kalani to go home.