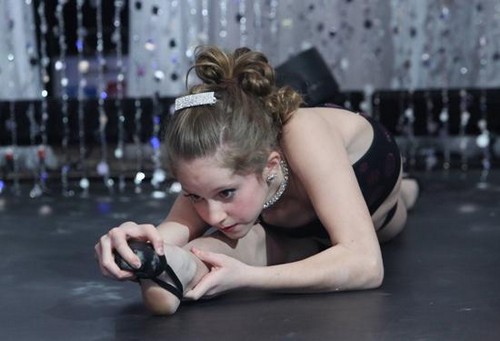 Tonight on Lifetime Abby’s Ultimate Dance Competition returns with another new episode called, “Dare to Be You.” On this week’s show when one mom throws another mom under the bus, things get ugly. Did you watch last week’s season 2 premiere episode?  We did and we recapped it right here for you.

On last week’s show 11 of the country’s most promising young dancers were selected from more than 1,000 national title holders.  The performers are all vying for a $100,000 cash prize and a scholarship to the Young Dancers Program at the Joffrey Ballet School in New York. Last week’s theme was “Fame,” as they geared up for their first performance in front of judges Abby Lee Miller, Broadway star Rachelle Rak and celebrity choreographer Richard “Richy” Jackson. Alliances began to form and the dance floor heated up as the youngest contestant rubbed one of the moms the wrong way.

On tonight’s show with this week’s competition theme as “Dare to be You,” all the dances are inspired by Lady Gaga. Under the eyes of this week’s challenge choreographer Richy Jackson, the young competitors struggle to embrace their own originality. The moms crack down hard on the dancers, encouraging them to “bring it” to the dance floor and one young dancer comes close to breaking down when she can’t remember her routine. When one mom throws another mom under the bus, things get ugly.

Tonight’s episode is going to be a drama packed one, which you won’t want to miss. So be sure to tune in for live coverage of Lifetime’s Abby’s Ultimate Dance Competition Season 2 episode 2 — tonight at 9PM EST.

The theme of the week is Lady Gaga. That means everything’s going to be really out there and all the contestants better start showing their personality. Yet, as Jessalyn pointed out some of the mothers, Melaney has been pushing her daughter too hard. To the point she may actually be damaging Hayley’s confidence. Giana has remained a bit of a nervous wreck since her fall last episode

Everyone has pulled themselves together in front of Lady Gaga’s choreographer, especially after he shows them a video message from her Ladyship. He’s also part of the group challenege this week. Showing them slowly all of the dance techniques, he then leaves the kids to dance for Abby.

For the second time, Jojo gets eliminated first. Ally’s mother has become obsessed with watching her progress and is again happy; however, her daughter also lost out in the competition. Surprisingly the winner turned out to be Gianna. Apparently she had pulled her act together in time but will she be able to hold it.

As her reward, Gianna gets to choose her costume but not her dance. With her mom’s help she was able to choose the one she wanted. Although her mom wasn’t done with Abby. Abby it seems doesn’t like it when people wear flip flops on her dance floor. Cindy has been duly reprimanded.

Later, as the rest of the group start practicing their routines, Abby walks around inspecting the groups. Something has become stuck in Abby’s claw. She doesn’t like how Jojo runs her mouth. She pulls over mom, Jessalyn. She tells her everyone has dealt with some bullying and it made them stronger. Jojo should probably try some.

Another problem area is Ally. She’s not great as a technical dancer. Abby pointed that out but Ally’s mom practically drew it all out. If Ally doesn’t get her act together then they’ll be sent home. Way to add on the pressure.

Earlier, Melaney had begun to nitpick things about her daughter’s technique, but when all three in the group are dancing, one of the other moms tries to help Hayley remember her dance moves. That’s a huge no-no to Melaney. Even after they leave the practice room she has an attitude with Shari.

Everyone is worried but it’s time for their second challenge. Gianna had a minor freak out during practice and, as she got dressed for her dance routine, her mother was being  very harsh with her. Shari tried to tell her that she’s only making it worse for Gianna .

The first to compete was Ally and Kalani. Kalani did really well and yet Ally missed a step. Someone got sent home for missing a step before. Ally can only think the worse.

Next up is Gianna and Trinity. Gianna never looked at the judges and both girls had minor technical difficulties. They’re literally in the same boat.

Jojo and the twins, Tyler and Travis . . . . All in all they did a great job. The boys had some missteps here and there but still did a great performance. Of course, during critique, Jojo had something to say.

Chloe, McKaylee, and Hayley are the last group out. Their dance was a mess. There were mistakes all over the place. One of the largest was the “mean” faces all the girls wore. To that Melaney takes exception to. She points out to the judges that before the girls came out to perform, Shari had told them to do a strong face.

Shari didn’t like essentially being thrown under the bus but Melaney isn’t going to have her daughter sent home over Shari’s advice. Chloe’s mom on the other hand has stayed out of the drama.

All the contestants are brought back on stage. None of them were little Gaga(s). They each failed this week by coming in short. Nonetheless, the bottom three is the entire last group.   Chloe, McKaylee, and Hayley are the bottom three. The faces were simply too much for the judges.

The judges were planning on sending Chloe packing but one of the judges used his save to keep her there. He sees her potential and now all the mothers will be gunning for her.