Did Adam Levine Get Engaged To Behati Prinsloo While Still Dating Nina Agdal – Cheater or Douche? 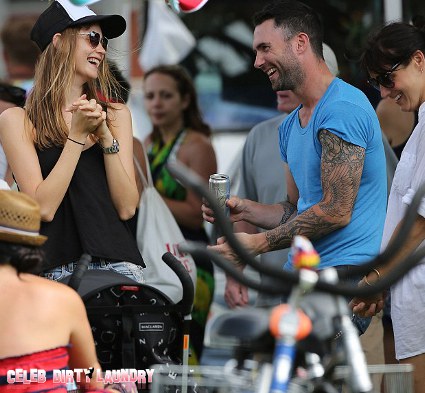 Recently the great womanizer Adam Levine got engaged to Behati Prinsloo. On one hand everyone offered him congratulations. Then on the other they remember the two had broken up a couple of months ago and that Adam had been dating Nina Agdal in the meantime. So was there some overlapping?

The story that was put out there is that immediately after he returned to the states from his romantic vacation with Nina, he called up Behati and won her back. Ouch! To make matters worse, well for Nina and not for him, is that his people then started to circulate the story he was never serious about Nina and that she was only a little bit of fun. I’m sure these rumors helped his now fiancee overlook how quickly he jumped into seeing and sleeping with someone else after their breakup but did he really have to do that to Nina. She at least thought it was serious.

That’s why she had contacted “The Wanted” tv show producers and asked to be removed from the show. She didn’t want her past dating life impacting on her relationship with Adam. If she knew she was a side attraction; she would have wanted to some screen time. He cost her five minutes in the limelight. To do that and inform her of your engagement via text is pretty damn low. Nina is reportedly heartbroken and most likely pissed.

What she should do is let the heartbroken stories die and find someone to date. Take Leo Dicaprio. He loves models that are barely legal and he’s in completely different class than Adam. Like the fact that he actually has class.