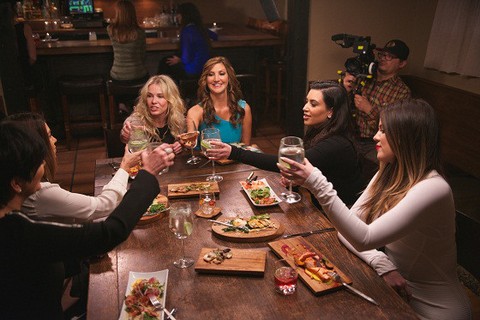 Monday night was a special night for fans of the Kardashian Family. Kourtney, Kim, Khloe and their mom Kris Jenner appeared on the E! show After Lately. The sister’s K and their momager were on the show to invoke payback to their former nemeses Chelsea Handler. It’s very tame and very disappointing.

Chelsea accompanies her friend (and fellow Kardashian friend) Heather McDonald to a party for Heather’s book My Inappropriate Life. Heather leads Chelsea to their table and says “Hi Dolls!” to the fame whore sisters and their momager Kris. Upon seeing her fellow dinner guests Chelsea is taken aback and a little horrified. Chelsea asks Heather where Jen and Sarah are. Heather says “those are work friends. These are my real friends”.

The sister’s K and the Calabasas Dictator all have different facial expressions when seeing the woman who humiliated them mercilessly on her show Chelsea Lately. Kourtney stares into space, Kim tries to look disgusted but she looks like she needs to belch, Khloe shakes her head and Kris gives a nervous smile while she sips from her straw. All the women do not look cute. I’m sure they were wearing the crappy stuff they designed for Sears.

Chelsea makes small talk asking who is at Dash if they are all at D’Cache Restaraunt. The idiots try to make Chelsea uncomfortable and it’s so lame. Are you here for the free food? says one of the monotone women. Chelsea drags Heather to the bar to chew her out, calling the dinner an Armenian ambush. Chelsea says she will stick out the dinner because she is a good girlfriend.

Back at the dinner table Heather says “I just love food”. Khloe chimes in “I wish I could have some but I don’t want Chelsea to call me fat again”. Chelsea tells Khloe she has a hot body, but the K sisters and their svengali are not impressed. Kourtney pipes up “How is the cocaine in L.A.?” Poor Chelsea rambles on and on about the drug until Heather stops her. She feels like she has to answer the question. Chelsea then asks about everyone’s black lovers. There is some chatter and then Khloe tries to take a shot at Chelsea saying “How does it feel to be utterly alone?” Chelsea states she isn’t alone much and Heather mentions Chelsea’s dog. More passive aggressive chatter make Chelsea more and more uncomfortable.

The last scene is Chelsea in the restroom. Khloe tells off Chelsea. She then slaps Chelsea on both cheeks, saying she won’t be bullied anymore. Khloe forces Chelsea into a stall why Chelsea yells “Don’t do this, Khloe!” Heather comes into the restroom looking for Chelsea and finds her in the stall. Chelsea is only wearing her undergarments and pantyhose. She is in a ball on the floor next to the toilet. Chelsea explains that Khloe took her dress as revenge. Chelsea then decides she will be wearing Heather’s dress to leave the restaurant. Poor Heather has to walk out in her undergarments, covered only by the poster board for her book as they both get into the limo.

Like their appearance as hosts on Chelsea Lately, the Kardashian/Jenner appearance was no where near as mean as these women are in real life. The writers adore Chelsea so of course they weren’t going to write anything vicious for these idiots to say. Either that or they are so dumb they couldn’t come up with anything else. I’m thinking it’s a little of both. I’m not surprised these fame whores and their momager jumped at the chance to be on one of Chelsea’s shows, but I am surprised they agreed to go along with such tame dialogue. This episode was super hyped but then it fell flat. Kardashian fans will think it’s amusing. The rest of us know that Chelsea probably still hates this family, and allowed this episode to happen to let the Armenian princesses and their Svengali embarrass themselves once again.