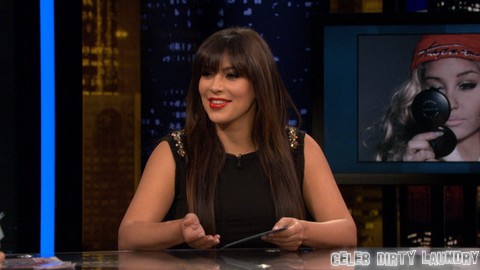 Tonight the Kardashian sisters, Kourtney, Kim and Khloe Kardashian and their mom Kris Jenner guest hosted Chelsea Lately. The women were kind enough to give Chelsea Handler the night off, but also used the air time to bash their former nemesis.

Kourtney, Kim and Khloe Kardashian opened the show with the monologue and welcome the viewers to Kardasian Lately. The women took turns reading from the teleprompter, taking shots at Chelsea Handler. They were pretty shaky trying to keep up with the copy on the teleprompter. Comments made were “Chelsea is off doing something really important, like drinking” and “Chelsea is off having sex with someone she just met”. Yawn. Khloe tries to be funny saying Chelsea Lately is the only half hour on E! that her and her family are not featured.  Next a video is shown of Chelsea herself thanking Kourtney, Kim, Khloe and Kris for hosting the show for her. Chelsea goes on to say they can help themselves to her clothes, food or whatever they want.  Chelsea gives an awkward smile before waiting for Chuy (her assistant) to say cut. Chuy keeps the camera rolling and catches Chelsea saying “Keep them out of my office.” She doesn’t realize she is dissing K sisters and their momager on tape. Cut to the Kardashian sisters yelling “F**k you, Chelsea!” 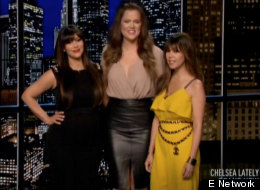 Kris sits in Chelsea’s hostess seat and introduces her daughters. She then says hello to Chuy and declares that Chuy is now her assistant. That would happen over Chelsea’s dead body. Chuy smiles as Kris asks “Are you glad we are on the show?” Of course Chuy is going to say yes and be polite.

The first story Kris reads from her cards is about Amanda Bynes and her continued craziness. Kris reads Amanda is threatening to sue anyone who prints false stories about her. This statement comes after seeing paparazzi outside the gym when she was kicked out . Kris’s response is “Welcome to my world!” One of her daughter’s pipes up “it always comes back to you!”  It’s nice they got Kris’ narcissism out of the way early in the show. Next is another attempt to insult Chelsea. Kris tells Kim “isn’t that Chelsea’s dress?” Kim says yes, and that they wear the same size. Really? The writers couldn’t come up with anything better than insinuating Chelsea is as fat as Kim and her Kimbryo? Perhaps the writers gave Kim this joke to help her deflect from her many maternity faux pas.

Next is a story about the Conan and Chelsea nude shower fight video having 2 million views on You Tube. Kris states that the best thing about that video is that Conan has a much better body than Chelsea. Kim pipes up and says she and Chelsea should both get breast lifts after she delivers her baby. Chelsea has said several times she sleeps wearing her bra because she is terrified of her breasts drooping. Looks like Kim will be going under the knife alone.

Kris reads the third story about Shakira’s ex-boyfriend saying he was Shakira’s manager. The ex is suing Shakira for his management fee. One of the K sisters says “always bringing it back to you!” Kris and her daughters talk about Kris being their manager and making money off her kids.

After the commercial break the next story pertains to a couple being kicked off an American Airlines flight for asking that the in-flight movie Alex Cross be turned off. The parents didn’t want their young children seeing this film. Kris brings the conversation back to her saying she was once employed as a stewardess for the same airline. Kourtney launches into a story about her and Kim acted up on an American Airlines flight when they were kids. Kris’ husband Bruce Jenner got a phone call from the airline while he was in Atlanta for the 1996 Olympics. He was informed of the girls’ behavior but out of respect for him they can stay on the flight. Kris and the Kardashian sisters had a good laugh while going down memory lane.

After the second commercial break Kourtney, Kim and Khloe interview Russell Brand. He is quite a character and he interacted great with the women. This was the best part of the episode. The women were relaxed and spoke to Russell with the same candor they have on their own show Keeping Up With the Kardashians.

I would like to know if the sisters K and Kris are satisfied with how the episode played out or if they hoped their payback to Chelsea was going to be harsher. But, maybe they are too nice to go there with Chelsea. I spoke to Chelsea Lately writer Thomas Dale today, and he said all of the women were a delight to work with. Thomas said “they were really cool girls and as a fan I was not disappointed. They also act the same way in real life as they do on TV. I think me and Kim should be friends”.

I have to say I was disappointed with the jokes written for this episode. I was expecting harsh criticism and low blows against Chelsea, but the insults were pretty mild. The attempts by the women to be funny fell flat. They just aren’t funny people. Also, some of the women’s hair and clothes left something to be desired. Kourtney can not pull off bangs and the ugly yellow jumpsuit she wore should be burned.  Khloe wore her hair back off her face with a little bow. It looked really immature.

I can’t wait to hear Chelsea’s opinion of tonight’s special episode of her talk show.  Do you think the Kardashians and Kris were harsh on Chelsea, or could they have taken it farther?