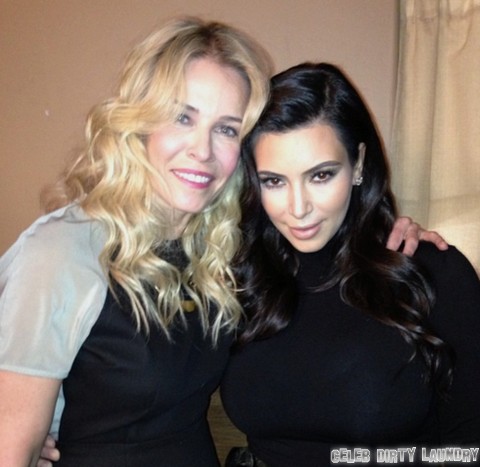 Monday night April 8th the Kardashian sisters Kourtney, Kim and Khloe and their momager Kris Jenner will invade Chelsea Handler’s territory on E! Network. They will appear on two shows back to back. I don’t know whose bright idea this was but it has disaster written all over it. The sister’s K and Kris have no talent whatsoever, and it will be interesting to see how foolish they will make while trying to entertain us.

The Armenian princesses and their Svengali will first appear on After Lately. After making up with Chelsea the reality television fame whores and their money hungry mother will dish pay back to Chelsea for insulting them the past two years. A mutual friend Heather McDonald takes Chelsea to dinner where they meet up with the fab 5, only to be snubbed. It will be interesting to see how far the sister’s K and the Calabasas Dictator will go to put Chelsea in her place. Their E! reality TV show Keeping Up with the Kardashians is a no holds barred farce about their mean-spirited, self-centered and delusional family life. We also see all of their dumb ass ideas to make money. After Lately is a scripted show (just like almost all reality TV so the Kardashian’s should be right at home) so I’m guessing the show’s writers (who adore Chelsea) came up with the premise and went easy on their big breasted, big mouthed and really big deal guests.

The second of Chelsea’s shows where these idiots will appear is Chelsea’s talk show Chelsea Lately. The three Kardashian sisters will host the show with Kris on the round table with two comedians. Good thing Khloe has some hosting experience from her X-Factor gig – such as it was! I don’t know how much good it will do her since her performance and nipple slip were panned. I’m sure there will be a mention of the cold war stand-off with Chelsea to try to get a few laughs. And of course there will be jabs at each other, since that’s how their family operates. I wonder how much of the show will be about the Kardashian’s doing hosting duties and how much will be self promotion. I can also see all the women choking in front of an audience. Khloe said she thought about faking a heart attack to get out of her X-Factor gig.

I previously wrote that Chelsea giving the Armenian Princesses and their Svengali a platform for payback was not going to work in the family’s favor. Chelsea is giving them a platform to make fools of themselves, just like she did when they were interviewed on Chelsea Lately. I’m wondering if this Monday night takeover was Chelsea’s idea or her bosses’ idea, and she just had to go along with it. Either way, E! is always looking to capitalize on the Kardashian/Jenner family so no matter what happens they will be happy.