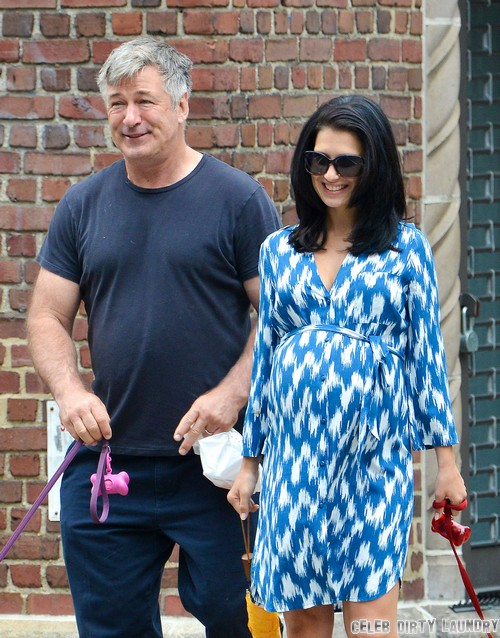 Alec Baldwin went for a walk today with his very pregnant wife, Hilaria Thomas, and their dogs. Alec was looking rather like he is experiencing a case of Couvade syndrome, better known as sympathy pregnancy. Alec’s large tummy protrudes in the pics below as do his bitch tits – is Alec perhaps taking hormone therapy in the hope that he can breastfeed Hilaria’s baby?

The miserable homophobe, with a long history of lashing out at paparazzi or anyone who upsets the looney, managed to control his violent temper while being trailed by eager snappers. I guess all the bad press Alec has enjoyed recently helped him to keep a lid on his temper. Good thing too because neither his cute little dogs nor his gold-digger wife could afford another one on Alec’s ugly outbursts. The paps and I, on the other hand, would have loved to see the real Alec in action – attacking people trying to earn an honest living. It’s what we’ve come to expect from the yoga student.

Anyway readers, you judge for yourself – is Alec experiencing sympathy pregnancy or is he just getting fatter, older, and uglier. Take a good look at that face of his and tell me – is that a face only a mother (or a famewhore wife) could love?

Alec Baldwin and his pregnant wife Hilaria take their dogs for a walk in New York, New York on August 18