All My Children MAJOR Spoiler: Guess Who Is Returning To The Show Now!

BY Dorothy Gale on May 13, 2013 | Comments: Leave Comments
Related : All My Children, Soap Opera, Spoiler 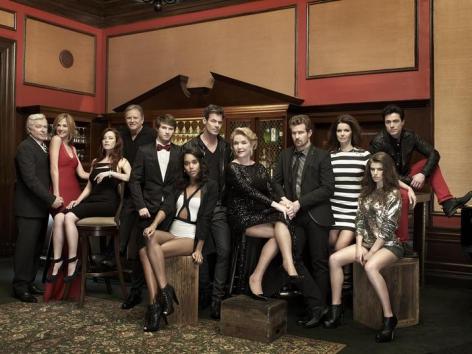 I consider myself a huge fan of All My Children, having watched it when it originally aired on ABC for more than 30 years. You can only imagine my excitement when I found out that the show was being brought back on April 29th by Prospect Park for us die hard fans via the internet and FX in Canada. For the past two weeks I have been enjoying watching some of my all time favorite characters; Adam, Brooke,
Jessie, David, Angie, Zach and Dixie reprise their roles. Here’s a brief recap of some of the happenings so far:

AJ (Eric Nelsen), Babe and JR’s son, is all grown up and Miranda’s best friend, but we are already seeing that he wants more in that relationship than to be just friends.

Angie (Debbie Morgan) and Jessie (Darnell WIlliams) are back and Angie is no longer blind thanks to David.

Brook (Julia Barr) and Adam (David Canary) are together and planning their wedding.

Cara (Lindsay Hartley) is working at the hospital with her brother Griffin (Jordi Vilasuso), after a long time away with Doctors Without Borders. Cara told David that their baby died, but we all know she is hiding something.

Celia (Jordan Lane Price) is a new character, her parents were both killed in a car accident and she has a guardian that pays for everything and makes decisions for her. I think Celia is maybe Kathy, Tad and Dixie’s daughter. But, who is the guardian and why is the Miranda Center off limits for her?

David (Vincent Irizarry) was just released from prison after being there for five years for shooting JR who in a gun struggle with David shot and killed David’s daughter Marissa (Sarah Glendening).

Dixie (Cady McClain) is back but without Tad (Michael E Knight), he is on assignment out of town and has not returned, yet. Dixie is mostly busy visiting JR in the hospital.

JR (Ryan Bittle) was in a coma for five years since the shooting but now he is awake and the only person happy about it is his mother Dixie. AJ went to visit his father and was surprised that he didn’t know who he was.

Miranda (Denyse Tontz) is back with her mother Bianca (Eden Reigel) who is having a hard time with the fact that her daughter was conceived by rape and knows she has to tell her soon.

Opal (Jill Larson) has a new house and her son Pete (Robert Scott Wilson) is back with her and in a, sort of, relationship with Celia.

Zack (Thorston Kaye) is back and helping Jessie to find Cassandra who vanished from the airport after Jessie was planning on bringing her home to surprise Angie. I am waiting for Kendall (Alicia Minshew) to return also, can’t wait to see both she and Zack together again. Cassandra was “taken” by people in the sex trade.

BEWARE Spoiler: If Prospect Park’s goal is to make All My Children fans happy, I can honestly say they are doing it right. Not only will Billy Clyde Tuggle (Matthew Cowles) be returning to the show to help Jesse and Angie track down Cassandra, but Dimitri Marick (Michael Nader) will be returning as well. It’s been more than a decade since Dimitri stepped foot in Pine Valley and now he is set to return as the head of one of Chandler Enterprises new division, Chandler Media. Dimitri had
a passionate romance with Erica Kane (Susan Lucci) does this mean she is not far from Pine Valley either?

All My Children has brought us some new characters and for the most part, they are a good fit. I am only having problems with the actor who plays AJ, what about you? How have you been enjoying the old and new actors in a much racier Pine Valley?