BY Kinsley Goldman on May 20, 2013 | Comments: one comment
Related : Dancing With the stars, Dancing With The Stars Season 16, Performance Videos, Reality TV, Recap, Television 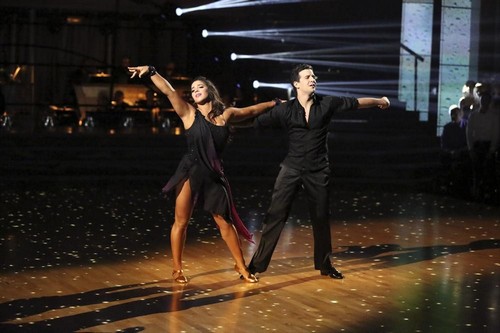 ALY RAISMAN danced a FREESTYLE for one of her last dances to convince the judges and America that she should win season 16 of DANCING WITH THE STARS.  After 10 weeks of entertaining, stylized dancing from the remaining four couples, only one couple will be crowned “Dancing with the Stars” Champions. Tonight was their last opportunity to impress the judges and viewers.    If you missed the show, we recapped tonight’s show for you and if you want to see how all the couples did go HERE!

Judges comments: Bruno: “Incredible, that was futuristic with a touch of exotic.  You took an incredible risk.  It seemed almost impossible, but you did it.”  Carrie Ann: “That was one of the most amazing routines I have ever seen on DWTS.  It was difficult and unique.”  Len: “I loved the conect I thought it had great imagination, I am dubbing you Alexandra the Great!”