BY Robyn Good on March 25, 2013 | Comments: one comment
Related : Dancing With the stars, Dancing With The Stars Season 16, Performance Videos, Reality TV 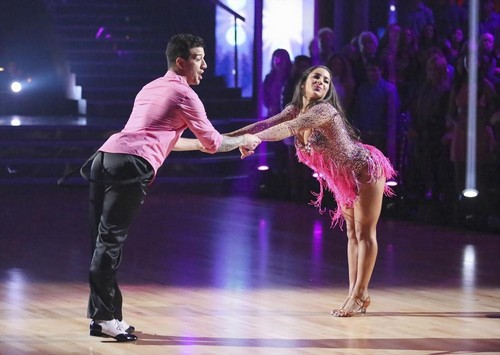 Aly Raisman danced a Quickstep, on the second episode of Dancing with the Stars: 2013 performance show tonight.  The competition heats up tonight on Dancing with the Stars this week when the first couple faces elimination.  On this week’s show the couples will be fighting for their survival and performing a Jive, Quickstep or Jazz routine. If you missed the show, we recapped tonight’s show for you and if you want to see how all the couples did go HERE!

Judges’ Comments: Carrie Ann: “All I have to say is the best Quickstep of the night. Fantastic!” Len: “The quickstep is not easy.  It was great, my only thing I have to say is your head was too much too the left.  But terrific!”  Bruno:  “It was like watching a bluebird on the floor.  You had a classic dance and gave it a personal spin.”

Watch the video below and let us know what you think? Do you Aly did enough to avoid elimination this week? Sound out in the comments below!