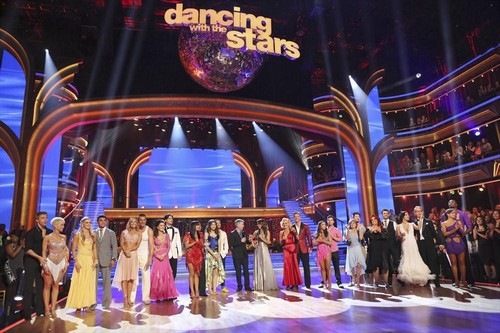 DANCING WITH THE STARS is back tonight for the second episode of the 16th season.  The glitz, the glamour, and an all-new cast of fresh faces hit the dance floor tonight fighting for their survival.

The competition heats up on Dancing With The Stars this week when the first couple faces elimination.  Last week the glitz, the glamour and the sparkle returned to the ballroom as season 16 of DWTS premiered.  A new cast of fresh faces hit the dance floor to impress the judges and America.  If you missed the premiere episode you can read our full and detailed recap here!

On this week’s show the couples will be fighting for their survival and performing a Jive, Quickstep or Jazz routine.  The Jazz is a new dance this season, the elements in the “Jazz” dance the judges will be looking for: jazz hands, kicks, leaps, rolled shoulders, quick turns and sideways shuffling.  If you want to see who is dancing what tonight, head over here for our awesome spoilers!

Tonight’s episode is going to have all the usual glitz and glam in the ballroom, which you won’t want to miss. So be sure to tune in for our live coverage of ABC’s Dancing With The Stars Season 16 episode 2 Performance Show – tonight at 8PM EST! While you wait for our recap, hit the comments and let us know how excited you are or the new season and who you are rooting for?