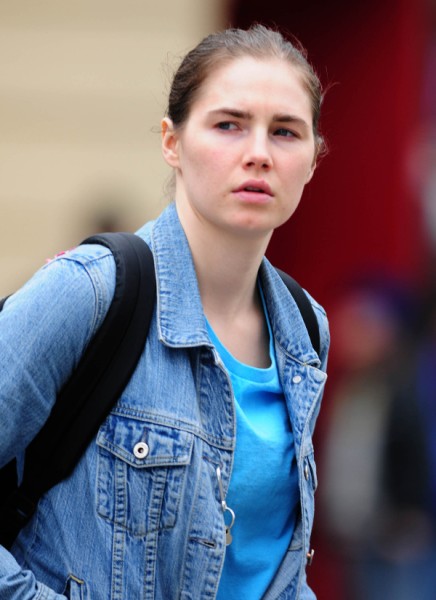 And just when you thought all of this was over….

Amanda Knox’s innocence and subsequent freedom is up for debate again in the Italian courts. Prosecutors are making arguments today to appeal Knox’s acquittal in the 2007 murder of British student Meredith Kercher. They are hoping to throw out the acquittal and form a whole new case that could ultimately force Knox to fulfill her 26-year sentence in Italy. Knox already has spent four years in prison for an initial conviction, along with former boyfriend, Raffaele Sollecito, but was released in 2011 due to lack of murder weapon, faulty DNA testing and weak motive.

Since then Knox has kept a pretty low profile back in Seattle with her family hiding from the glares of infamy. But all that’s set to change. If Knox’s case isn’t reopened after today her social calender looks like it’s going to be tight over the summer. Her book, Waiting to Be Heard, is set to be published on April 30 and she will also give her first interview to ABC news around that time. She reportedly got $4 million for the deal.

Is anyone just as lost as I am over the whole thing still? I just can’t get completely behind her. On the one hand I can’t wrap my brain around someone with her background and family doing something so cold-blooded but, on the other, nothing else makes sense. Sadly you want to give her the benefit of the doubt because she’s young, female and attractive. And I’m not sure if her silence so far has helped her cause. The way she disappeared to Seattle almost had a Casey Anthony feel to it. Now, I know she wasn’t hiding. There are plenty of pics with her and her new boyfriend doing normal things around town but the fact that she hasn’t talked until now is odd. Perhaps I’m just a product of today’s immediate sensational news cycle. I expect everyone should run out of jail onto Oprah’s couch as fast as their feet can carry them. Famewhores are the norm. Why is it so off-putting that the young woman needed time to breathe and recoup with her family? Why should that put my smutty antennas up?

What are your thoughts on the Amanda Knox murder trial? What do you hope for in today’s verdict? Amanda Knox is said to be “very anxious”. I can’t imagine what the must feel like.