Amanda Zuckerman & McCrae Olson Move on with Post-Big Brother 15 Life: How Long will the Pizza Boy Last with the Evil Queen? 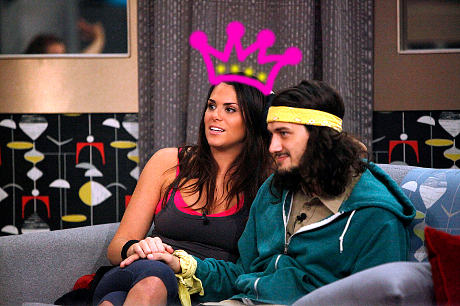 I think everyone was quite glad to see this crazy and controversial season of Big Brother 15 come to a close, as this summer’s game was filled with some of the nastiest players the long-running series has ever seen. But in the midst of all the drama, ridiculosity, and scandalosity, this season’s Big Brother definitely produced one of the most powerful and — we’re just going to say it right now — awkward showmances we’ve ever been subjected to in all our years of watching reality TV. Yes, we’re talking about that moment when the Pizza Boy from Minnesota fell in love with the Fancy Real Estate Agent from Florida.

Over the course of the show, viewers saw Amanda Zuckerman and McCrae Olson fall head over heels for one another. While the relationship might not seem to fit on the outside, the couple grew incredibly close over the course of the game and, eventually, formed a bond so tight that they seemed to become one with their bed and sheets. McCranda stayed in the house, and controlled the house, for an incredibly long time. But the mystifying part about the entire situation is that both Amanda and McCrae were  extremely poor competition players, which meant they relied on words, lies, and fear (and, in some people’s eyes, this could be considered good play, I suppose).

Neither Amanda nor McCrae won much of anything; instead, they relied upon Amanda’s attitude and terror to pile drive their way through the game. Luckily, after GinaMarie displayed the balls to nominate Amanda, the dynamic lovebirds were separated. And the Evil Queen’s rule came to a bittersweet end — as McCrae was left standing to fight on another day.

But, like we said above, he didn’t possess the competition skills necessary to push him through to the end and secure his safety, so he was soon following in Amanda’s footsteps all the way to the Jury House. While we thought wishes never came true in the Big Brother house, ours did this season: That McCranda wouldn’t win.

Now that the game is over and Andy Herren managed to take home the coveted title of Big Brother (which sparks a whole other debate), the houseguests will return to their normal lives in the outside world. Supposedly, McCrae will be moving to Florida to spend time with his lady love, and we just have to wonder . . . . How long will McCrae stay with Amanda? How long before he realizes that the attitude Amanda displayed inside the House wasn’t an act but her very real personality? Will he be able to live with her for the long haul?

Maybe that is one of the things McCrae loves about Amanda and, if so, all the more power to him. Oddly enough, we wish this Crazy Couple all the best — so long as we don’t have to watch them on TV any longer. We’re crossing our fingers in hopes that Big Brother doesn’t bring them back next year for some ridiculous all stars rematch.

What did you think about this season’s gameplay? Do you disagree with me? Did you love McCranda? If so, I’d love to hear from you!