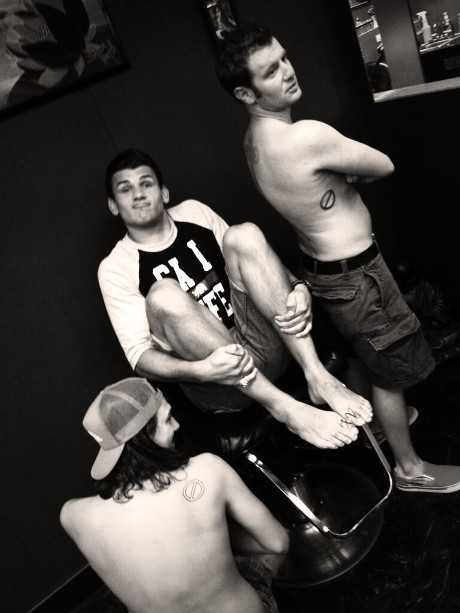 With Big Brother 15 having left an unsavory, unsettling, slightly bitter-sweet taste in our mouths, the drama continues, most notably around Evil Queen Amanda Zuckerman and her beux McCrae Olson. This latest season of houseguests, while incredibly annoying and offensive, have managed to remain very close friends even outside of the house. It’s actually sort of cool to see that friendships were created — and have appeared to last. While there might be an element of publicity in the hang out sessions, it seems a bit unlikely, as what in the world do they have to promote? (Perhaps a desperate plea for a spin-off reality show?)

Amanda and McCrae, alongside Judd Daughetry and Jeremy McGuire, went out and got matching tattoos! Both Judd and McCrae got a Power of Veto symbol. Jeremy chose to go a more modest route and got a “V” tattooed on the bottom of his toe — where no one will be able to see it.

It was McCrae’s first tattoo, so you can bet your bottom dollar that Amanda was there to document his journey. She posted a photo, which is actually quite stylish, on Twitter. Alongside the photo she used #Brothers. Aw, how cute. Fellow BB houseguest Andy Herren didn’t join in the fun, but he tweeted,  “UGH. I WISH I WAS THERE. I MISS EVERYONE… except McCrae. H8 him.” Andy was kidding, of course, with his statement addressed to McCrae. Their relationship was always one characterized by playful banter and teasing.

What do you think about McCranda & Co. hanging together outside the Big Bro house? Let us know your thoughts in the comments section below.