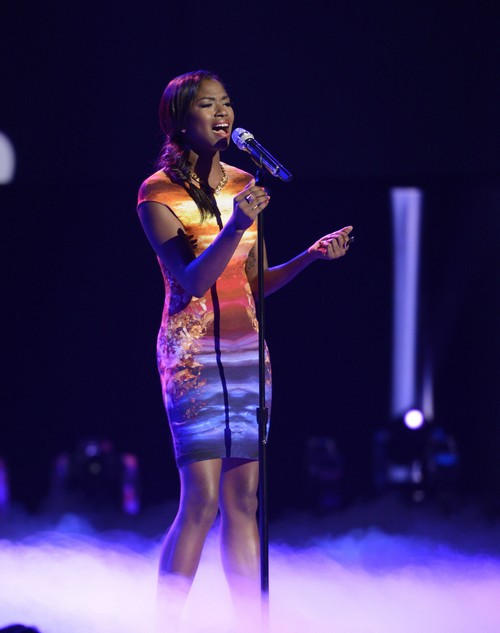 Amber Holcomb would have been voted off eliminated tonight but all singers were saved by the judges in  an obvious and predictable maneuver to extend the show another week. The end of another American Idol season is approaching. While the actual star of the show remains Ryan Seacrest’s hair, there are four singers left who are trying their best to upstage it. There are three more weeks left until the winner of American Idol is announced, which means several grueling eliminations to get through.

However, there’s one problem – there’s four contestants. And including tonight, there are currently three eliminations left. If they continued on schedule and eliminated someone tonight, that means that they will be left with exactly three contestants and two eliminations. Yeah, the math doesn’t add up there – especially not if the producers don’t want to lose millions of dollars on a possible elimination night but with nobody left to eliminate

So because the judges need to have three more eliminations, someone came up with the brilliant idea to have the judges use their once chance to save an eliminated contestant tonight although the save was supposed to be restricted to be used prior to the final 4. Last night’s singing competition was the final four, and it’s looking to be a tight competition between all of them. During that show, Ryan mentioned that there would be a special announcement tonight and guess what, as predicted it is that the save could be used.

So what will this announcement be? Basically, the judges can only use their save a contestant decision up until week 5 – not further. So Ryan will basically be revealing that the judges will be using it tonight to save a contestant. After the viewer votes are rigged counted, and the announcement of who is eliminated made with much fanfare, the judges will then ‘save’ that contestant from losing their dreams and going back to school or their job at McDonald’s [we kid, we kid]. Basically, the judges don’t want to have their their asses kicked because they have three more weeks and they need three more eliminations. We can’t have that, can we? American Idol losing millions of dollars? NEVER.

So who did you think would be eliminated and then saved tonight, was it Amber? Will it be Angie Miller, Amber Holcomb, Candice Glover, or Kree Harrison who eventually wins the coveted winner title? Let us know in the comments.